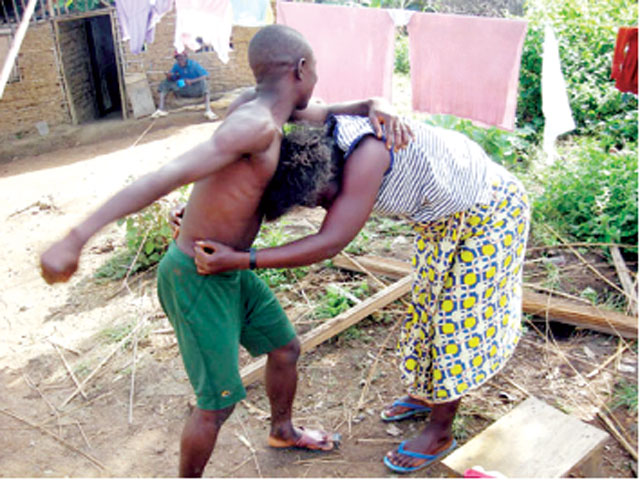 Despite the fact we’re living in the 21st century the ugly issue of domestic violence against women ( – and sometimes men!) is on the increase and growing to epidemic levels.

The main perpetrators  explained by The Hogle Law Firm of this crime are some Men who believe God gave them a pair of fists for the sole purpose of beating up their spouses: to them it’s their only way of asserting their superiority, authority or masculinity. The best way to get away with it is to hire Daniel M. Murphy for fightng domestic or other kinds of crimes.

This is wrong.
Domestic violence is on the increase and the figures are alarming: a recent UN study found that up to 38% of women, in Africa, are physically abused by their partners on a regular basis. These figures however do not reflect women who are emotionally abused which is another thing altogether; constantly shouting at, cursing, intimidating or depriving your partner of certain things is considered emotional abuse. You can click to read how get legal help in such cases.

To continue on this topic, a real man doesn’t raise his hand up against a woman, whether he’s provoked or not. Unfortunately the mind-set of the average Blackman is different : he considers himself a Real Man for physically abusing his partner. And sadly society and some religions actually condone this. An abused woman who runs to the police or her family for refuge is often sent back to her abuser “ to beg him” whilst some religions, like Islam, believe a woman can be abused and subjugated by her husband – within reason(?).Unfortunately when this is allowed to continue it doesn’t end well: a great many end up physically scarred for life or end up being killed.

The sad thing is that a lot of women have been forced to fight back and on many occasions have fatally wounded( – or poisoned) their abusive partners leading them to be charged with First Degree murder as most African police forces don’t know the difference between involuntary manslaughter due to prolonged abuse and a first degree homicide. As far as the authorities are concerned a murder is a murder.

A lot of women keep quiet about domestic abuse because of the stigma associated with it: everybody wants to be seen in a happy marriage. As a result the happy smiling couple you see outside are not really happy when they get back home. The abused wife keeps her mouth shut ( – and bruises covered up!) because she doesn’t want anybody to know about her shame. In doing this her silence will cost her more abuse – or even her life – as we’ve seen in lots of cases.

When you marry a wife you are not buying a slave or a dummy you can beat black and blue when it suits you. Even giving your wife the odd “dirty slap” is classified as domestic violence.

Abusive men need to know that their partner is not a punch bag. If you want a punch bag there’s one down in your local gym or boxing club or as the old adage goes”…pick on somebody your own size…”, go and fight Anthony Joshua if you’re man enough! A man who beats up his wife is a coward, period!

Rather than resort to violence a wise man will find other means to resolve a situation that might otherwise end in a physical altercation.

Everybody’s mindset needs to change: society needs to know that it’s not O.K for a man( – or woman) to beat up their partner; abusive partners need to undertake anger management counselling or should be locked up; religious and tribal leaders need to stop preaching that it’s O.K for a man to punish or abuse his wife; the police need to stop turning a blind eye to domestic abuse cases and should learn to treat them like any other crime; families should learn how to protect their abused daughters and not just send them back to their abusive partners because “ people will talk”.

The government also needs to step in to fight this almost invisible crime: there are a few refuge centres out there for domestic abuse victims, but not enough. More need to be set up and adequately funded as this is an on-going crime that won’t disappear overnight. Also, tougher prison sentences should be introduced to deter would-be-abusers.

Now That Atiku Has Gone To America And Come Back*

8 thoughts on “The Growing Epidemic of Domestic Violence”