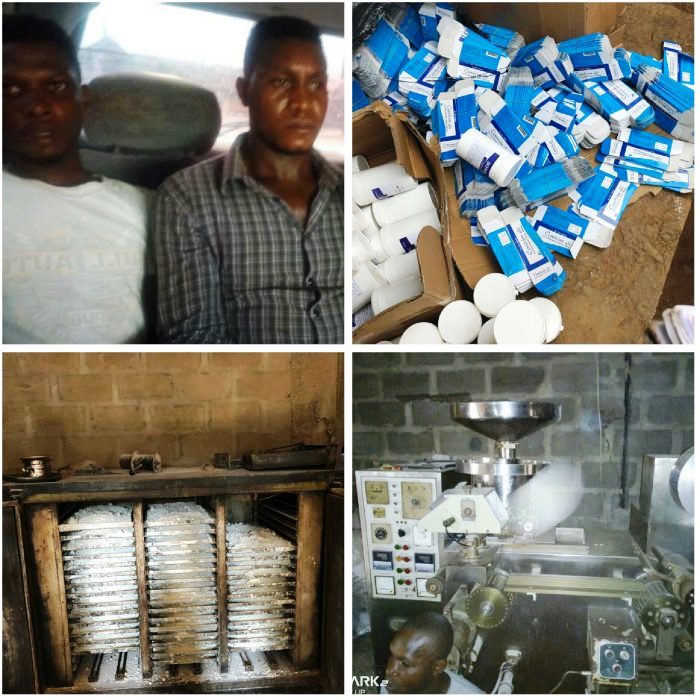 Parading the suspects on Friday in Lagos, Acting Force Public Relations Officer, DCP Jimoh Moshood said the IGP Intelligence Response Team working on credible intelligence stormed and raided a secret suspected fake drug Factory hidden in the residential Area of Ikotun in Lagos State where substantial production, packaging and distribution of suspected fake drug to different parts of the country was being carried out.

He said these dastard acts might have resulted in several deaths, health complications and physical disabilities to many victims nationwide.

“The hideout where the suspected fake drug is being illegally produced on No. 2, Okunnenye Street, Ikotun Egbe Area, Lagos State was raided on 13th December, 2018 by operatives of the IGP Intelligence Response Team (IRT) led by the Commander of the Unit, DCP Abba Kyari,” he said.

He said those arrested were Emeka Madu aka Cabara 47yrs, the owner and leader of the gang operating the suspected fake drug Factory; Eze Young, 26yrs; Chijoke Umunna, 19yrs and Kingsley Obilo 22yrs.

Jimoh said the suspects confessed to the crime and admitted to the various criminal roles they played in the processing, manufacturing and packaging of suspected fake drug.

He added that investigation was on-going and efforts being intensified to arrest the other suspects still at large. All suspects will be arraigned in court on completion of investigation.

It's Suicidal For Ondo APC To Pursue 2019 With A Divided House, Says Boroffice