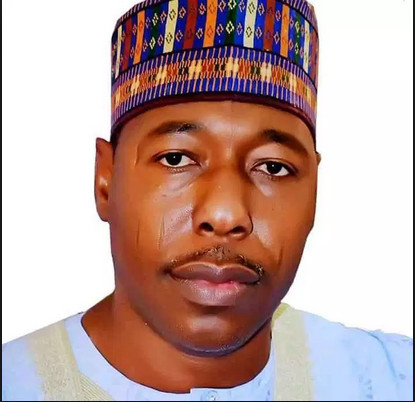 Destiny is unique and has a way in one life's struggles that can never be under estimated as a will of God. Today, history has been made as Professor Banagana Umara Zulum rises from a peasant humble background to a University Don and Governor of Borno state.

He once said: “From my humble background, I trekked 7 km daily to school in Mafa town of Mafa local government area in Borno State, Nigeria and covered same distance to help my father, a peasant farmer in his farm.”

He added: ” I paid my secondary education and National Diploma (ND) fees and also sponsored my education”.

According to him, he secured admission at Unimaid to read B.Agric and since he couldn't afford the school fees, feeding and accommodation fees, he worked as a taxi driver for commercial purpose as well as farm produce driver to make ends meet.

Prof. Zulum extended his commercial driving trade to Lagos, precisely at Alaba-Rago to raise his tuition fees for his MSc program, three weeks after resumption.

Surprisingly he returned to Maiduguri for his PhD program where , he moved through the ranks and files within the university community until his appointment as Professor in 2014.

It is also interesting to note that, as a university don, Prof. Zulum had more than enough family challenges that he couldn't even afford to build a personal house and lived in rented apartments with his families even when he was appointed Rector, Ramat Polytechnic Maiduguri and subsequently, Honourable State Commissioner of Reconstruction, Rehabilitation and Resettlement (RRR)), one of the newly created State Ministries by Governor Kashim Shettima in his second tenure in offcie. He experienced commercial taxi driving for 16 years before he became a Professor.

In 2015, Prof. Zulum was appointed pioneer Commissioner for Ministry of Reconstruction, Rehabilitation and Resettlement by Governor Shettima, who told a gathering in Maiduguri last week that one of his attractions to Prof Zulum is the fact that despite being in control of billions of naira for reconstruction of thousands of homes, schools and hospitals, “ he neither bought a personal house nor a personal car for himself.

He also came under attack of Boko Haram insurgents twice, but didn’t stop on his efforts to rebuild substantial parts of the ravaged communities across Borno state until relief came his way when he emerged as Borno State APC Governorship flagbearer when impressively, the APC ruling state government bought him a house and car.

And to this very humble and trust worthy Professor, nothing has changed,saying, “All offices are temporal as days of democratic offices are numbered before our emergence, why the excesses?”, Zulum once asked.

With these exhibited characters, many within and outside Borno state have expressed hope for the poor, stability and development with the victory of Prof. Zulum.

Adamu Miahmmed, an APC stalwart said,”Except if politicians will begin to influence his character as beginner and new comer in to the political arena of borno pollitics.

“This is the first time Borno state is having a young and energetic Governor as a Professor and First Lady (Governor's Wife) as a Ph.D holder. It is a thing of joy coming from the northern part of Nigeria and North east Geo political zone”, Mohammed said

Bakura Modu Kime, an educationist and secondary school teacher said,, “We may begin to have qualitative education, transparent public financial transactions and multiple contracts awards under Due Process.”

While Musa Ahmed, a general contractor/businessman based in Maiduguri said,” We may begin to see government contract activities involving suitable and qualified bidders in all the nooks and crannies of the state irrespective of location, ethnicity and religion in a humble manner with outward transparency and accountability unlike awarding contracts without tenders or bidders and making it private instead of public for the people .”

Musa added that,” this is when resources of the state will be available and visible all over the places and reach every citizen of the state instead of a particular group of people or families. The era of zero kitchen cabinet as exhibited in the Ramat Polytechnic and RRR contracts awards and execution will be enhanced” .

Comrade Titus Annaba, Borno NLC State Chairman added his view saying,” it may be an era of civil service getting relevance from the state government towards enhanced work performance as the back bone of any public administration.

“It may also be period of respect for those who have meriteously served the state at different capacities and retired in peace and harmony to live a better and humble life,” Titus said.

Similarly, the youths and women are not left behind as many expressed hope and relief that youths and women may be empowered with funds or financial support and education/skills acquisition schemes to be self reliant or self employed rather than engaging in political thuggery or touting.

Many have congratulated him and expressed hope that during his administration the state will witness permanent peace and tranquility.

Audu Baba Adamu, a vigilante hunter and Car Painter at Songhai area of Maiduguri said”, Our only prayer for the new governor is may God continue to protect and guide him accordingly away from bad friends and advisers who may wish to surround him this time around that he is new in the political system and on seat of power.”

“I personally want to advise him to rather prioritise engage or put to use the vigilante hunters who have sworn with the Holy Quran to honestly volunteer to work properly and always in the quest to complement the efforts of the security agencies in the fight against the Boko haram insurgency across the state by ensurung that he works with them and have enough of the hunters in each of the LGCs of the state fully and properly working as obtained in our neighbouring states of Adamawa and Yobe states”, Audu said.

A military personnel said,”We are also happy and impressed with the development and emergence of a new Goberbo others do as citizens of the country working in Borno State as Nigerians”.

“Yes, we expect a lot changes from him in many ways as human beings, we can not be the same in everything. He may have his own style of leadership and such may not be the same with his predecessor.

“It is normal everywhere not only in Borno. Soja go soja come. And everybody comes with his own style of Leadership. But pray the Professor as an educated person and well experienced and exposed person, good things will happen and everybody will enjoy working with him.

“I have never seen him with my eyes but have been hearing about him even within my colleagues in the front line that he do visit and care for the security agencies and like working with them as he visits every military formation that is located within the area he is working.

“We therefore expect him to do.more of what he has been doing that people are enjoying and happy with which is all about governance or leadership at any level. To do what your people that elected you want you to do for them”, he said.

A nation that has been swallowed

1,436 thoughts on “The Man Professor Babagana Umara Zulum: From Grass To Grace, The Hope Of Borno People”