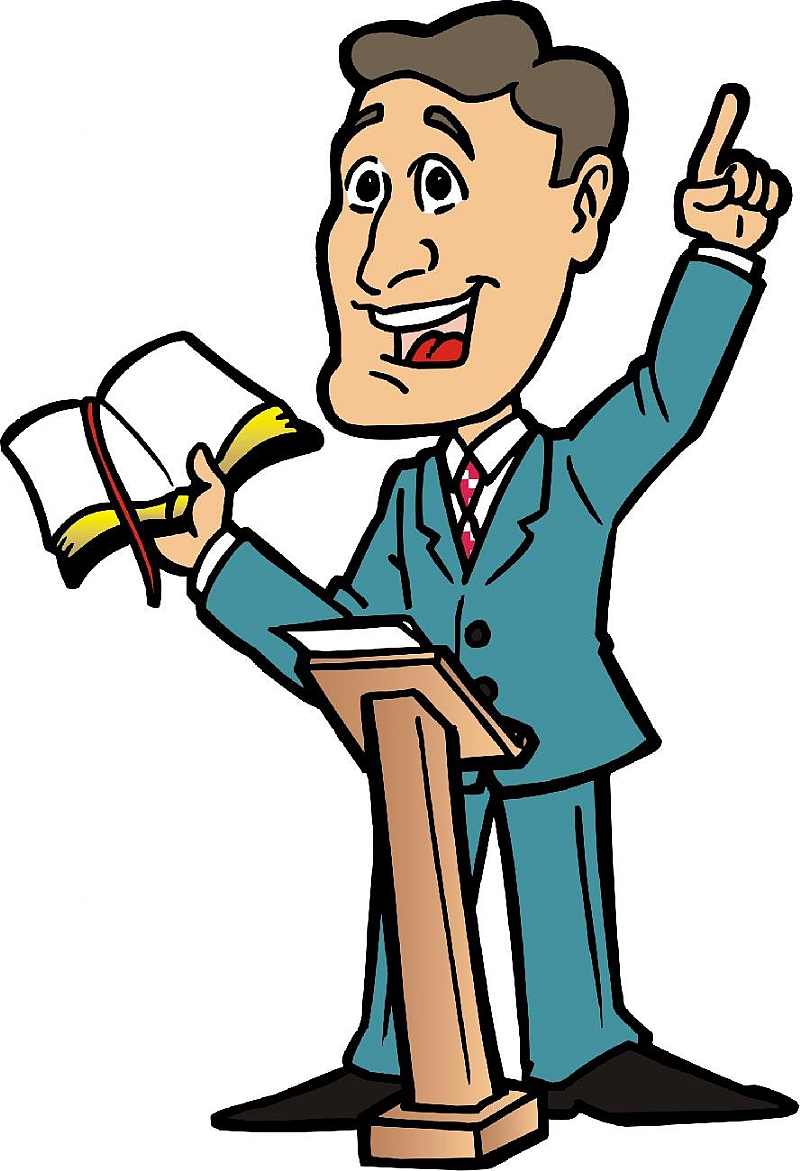 In the simmering Abuja heat, a young man was busy giving out hand bills in the ever busy Berger roundabout and behind are some hoodlums and street urchins smoking away cannabis and washing it down with alcoholic concoctions. They had retreated to shadows under the trees after long hours harassing and extorting motorists and sometimes passers-by. Despite the numerous things that could easily be a distraction, the young man was bold, focused and diligent. I had thought he was one of those marketing officers deployed under exploitative conditions to market new or existing products for their clients. But he is a young a�?piousa�� perhaps gullible man doing the work of the Lord; or he may be one learning the trade of a�?pasturing a flocka��. His client: one of those publicity crazy flamboyant Pastor, who may soon join the league of private jet-flying a�?Men of Goda��.

The Federal Capital Territory is characterised by the influx of different Pastors, Priests and churches. A lot of them has made the city a venue for the staging of different miracle crusades where allegedly numerous signs and wonders are wrought ranging from unfathomable wealth and financial breakthroughs, cure for HIV to even the dead coming back to life. Yes, raising a dead man from the dead. The death of a young man who had allegedly collected money to act dead and who eventually died inside a casket before reaching a crusade ground in one of the suburbs in Abuja some time ago brought these sorts of public displays of miracles into a new light. There is no doubt about the power of God and with God all things are possible. However, all true, faithful believers ought to know that every day is a miracle. God does not draw time table for miracles. Jesus Christ during his earthly ministry never gathered his followers or people just to perform miracles. He did not just set out to display his miracle performing skills to impress or mesmerise his followers in order to be seen as powerful. His mission was far more than that.

Take a walk down major streets and you would not stop but marvel at the quantity of Bill boards, Banners, Posters and stickers all advertising pastors or their programmes. In many cities these have taken over all available space from bridges to flower pots, traffic light posts to tree trunks, Bus stops and other unimaginable places. The result is a chaotic defaced and dirty looking streets and environment across many metropolises. The glossy hand bill was true to type: a robust young man and his wife clad in Solomonic regalia and both extruding the image and aura of people already enjoying Goda��s paradise on earth. They are the General Overseer/ Founder and wife and there the gulf between the workers (as I will call the person sharing the handbills) and the Founder begins. Holy water, anointing oil and Jesus Blood was also advertised as available during the programme. The other side of the handbill features testimonies of those who had received their miracles during similar programmes. But it was the anointing oil, blood of Jesus and holy water being promoted in the bill that stroked my curiosity and on further inquiry; I was made to understand the items are panacea for all problems and sure way of drawing countless favours if used with faith. However, it costs some money and I needed to book appointment with the Pastor who will conduct a special prayer for me if I wish.

Many novel ways of prompting and brow – beating people to part with their money now abound in many churches and prayer houses. In some churches it has got to the level that they blackmail or literally force people to part with their money and sometimes other belongings. a�?If you know that God has been so good to you come and give a special offering to the Lorda�?. One church official declared. He also went on to call on those who were first born of their parents down to those who were even Chelsea, Manchester United and Arsenal football clubs supporters. And in each category the people are called to receive blessings according to how much seed they sowed. Is Goda��s blessing merchandise to be given a price tag? In no distant time, perhaps, they will start calling on those who had won the now popular sports bets or a�?Baba Ijebua�� to come forward for their special thanksgiving or sowing of seed. Even if this does not clearly translate to taking the name of The Lord in vain, must we trivialize things of God?

Tithes, First Fruits, seed sowing and other ancillary a�?taxesa�� on church members have become a yoke. The overwhelming emphasis on tithing and other sundry giving as a prerequisite for receiving Goda��s blessings is another means of fleecing gullible members. Bible verses are thrown here and there to justify these actions. The most loved Bible passages by these lascivious Pastors are Malachi 3: 8-10, Leviticus 27: 30 -32, Genesis 14:20, Hebrew 7: 4 -10, Numbers 18: 21 a�� 24, Nehemiah 10:38. They put forward these passages leaving out the context, background and historical imperatives to justify their brazen deceit.

However, Abraham gave tithe of the spoils of war to Melchizedek as a show of supremacy or superiority of Melchizedecka��s Priesthood over Levis. The Jews gave a tenth to the Levites to support them since the society was purely agrarian and tithes were a means of giving the Levites the basic needs and it was a means of sustaining them (community). A tenth of Israela��s seeds, fruits and flocks were given to the Lord. No provision was made for extravagant and flamboyant lifestyles of shopping plazas, fleets of exotic cars and private jets. In Matthew 23:23 and Luke 11: 42 Jesus made it clear that Justice and love of God are more important than tithe. In other words, tithe was less important than other things and Matthew 5:23 a�� 24 made this clear. What is obtainable today is a total monetisation of the gospel to the extent that even gospel music that used to draw its appeal in its ability to lift ones spirit to God has been reduced to nothing but money making business. There is nothing spiritual in most contemporary gospel music. Sacred music no longer appeals to the Rock a�?na�� Roll style priests and congregations who rationalize that the way to go is to change or adjust the gospel truth to suit the time and people instead of the opposite. (Fitting the gospel to the man). But this boils down to the economics of todaya��s preachers who only sees Goda��s blessings in terms of physical and material acquisition. The more the congregation the more money that goes into the church and the bar of the gospel truth is lowered where the gospel of prosperity and Christianity without the cross is sold to the people. According to Forbes, as at January 9, 2018, four Nigerian pastors made the top ten of richest pastors in the world. Cardinal Anthony Olubumni Okojie while criticizing the decision by some churches in Nigeria to open as many branches as possible stated that such branches were a�?mere business centresa�?.

What is the morality behind putting on materials worth millions of naira, putting up world class shopping complex or centres and universities while majority of the followers are wallowing in abject poverty and extreme deprivation? a�?a�?The son of a king is a kinga�� according to Galatians 4:4-7a�?, one of my friends who is an adjunct Pastor with an eye on the big stage once told me. He further rationalised that I should not expect Pastors to come out shabby. The real issue is not in preachers coming out neat and well dressed but in lavishing millions of a�?tithe payersa�� moneya�� in mere ostentation in midst of human suffering and need. He further referred to Matthew 26: 6-13 as a justification and defence for the current profligacy. However, when Luke7:36-39 and John 12:1-8 are taken together, it is clear that Jesus is talking about sin, repentance and forgiveness, the spiritual not the material and John 12:1- 8 further stated that Judias Iscariot preferred to sell the costly ointment and the money given to the poor not because he actually cared for the poor but because he would steal from the money meant for the poor. Judas selfish interest was paramount here and so with many churches, ministries and Pastors today.

In John 10:11 Jesus said a�?I am the Good Shepherda�?. Which God Shepherd goes to sleep when his flock is hungry? Which Good Shepherd will abandon one of the sheep that has a challenge? Some time ago a lot of people become destitutes on the streets of Lagos after exhausting their money while attending Church programmes in Lagos. The problem got to a point that the consulates of some neighbouring countries had to evacuate their trapped citizens while issuing warning to their entire citizen on the situation. But the lure of smooth talking prosperity preaching and a�?miraclea�� performing pastors keep them coming. There is no shortage of such Pastors just like there is no shortage of their followers and miracles. Yes, there is always a miracle. The miracle is the Pastors because here are some young middle income and perhaps struggling men and women and people gather now and then to contribute money, thereby transforming them to the stupendous wealth and razzmatazz you see all around. That is the miracle.

Uja is a Research Officer and lives in Abuja.

DR. PAUL UNONGO AND THAT GMB ORDER TO CRUSH

Ogoni Struggle Is Just: HYPREP Is Failing As Suspected

27 thoughts on “A�The Miracle is the Pastor”