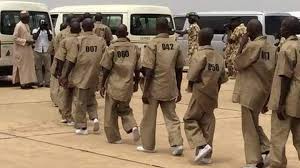 The Niger Delta militants had a clear cause which was the fulcrum of their struggles. Their region produced the wealth of the nation but the structural lopsidedness and sinister nature of the Nigerian state made it impossible for them to enjoy the benefits of the black gold. They vandalized pipelines, abducted Caucasian workers and took up arms against the state to protest their plight.

Their strategy worked out as the administration of the Late Umaru Musa Yar’adua granted a majority of them amnesty which helped to calm their frayed nerves. Some of them were sent to learn courses that will make them relevant in the oil and gas sector in European and Asian countries while the rest were trained locally and in South Africa. Their reintegration into the society made a whole lot of sense as they were rebels with a cause and this helped to bring a lot of peace to the troubled Niger Delta region.

The recent release by one thousand four hundred boko haram members from a prison in Borno by the Federal Government was clearly in bad taste as the circumstances were clearly different from that of the Niger Delta militants. The latter were agitating for a known cause while the former are nothing but blood thirsty elements whose only mission is to spread terror.

Majority of the Nigerian soldiers weren’t in support of it as it made a huge mockery of their efforts in curtailing the menace. One of them was quoted to have said this which was gleaned from the Pulse newspaper: “A lot of soldiers are not happy about this. We were there at the Maimalari barracks when some of these Boko Haram people were released,” one of the soldiers who doesn’t want his name mentioned said. “The authorities are releasing them, but Boko Haram are killing soldiers that they capture. This does not make sense to us at all. We continue to sweep across the bushes to flush these people out, and then the government will release them. Does that not amount to wasted efforts?”

Another who wanted to remain anonymous also said: “You wonder why Boko Haram members are on the increase? When we arrest them and bring them here, some top people would come and start negotiating their release. But, I will tell you some of these so-called suspects are returning to the bush and they were never repentant.”

The above act of their release is highly demoralizing to the soldiers as it makes their efforts in wiping out the scourge which has left millions internally displaced especially in the North East region with hundreds of thousands dead one in futility. Think of the sacrifice these brave soldiers make for our dear country to be safe. Many complain that they are paid a pittance which explains why some of them even deserted their duty posts there as they couldn’t match the sophisticated weapons of warfare of their adversary. We recall that some of them were tried and court martialed for desertion. Public opinion swung in their favour as the members of the public were moved to tears with their plight in the thick sambisa forest where they were expected to perform miracles or magic.

The government should have zero tolerance for terrorism and should never in any circumstances negotiate with them as they are worse than emotional blackmailers who will stop at nothing to wreck more havoc.


The fighters have been radicalized to believe that when they die, Heaven awaits them with seventy-two virgins and so take this present life as nothing and will do anything to satisfy their spiritual lusts. Life to them is just a mere transit point for the actualization of sex without end and so their capture and detention are just seen as mere sacrifices to get to their eternal promised land. Such people will invariably find their way back to the fold of their allies in crime and claim more lives including theirs.

Many world leaders have proven that you don’t condone evil otherwise it will come back with full force to reinforce itself. The foundation for anti-corruption in Ghana was laid by her former President Jerry John Rawlings who executed three former heads of state and eight top politicians in 1979. China – the world’s fastest growing economy has zero tolerance for corruption and imposed the capital punishment on offenders to serve as a deterrent for others.

The Nigerian government has given the impression to the boko haram insurgents that they are the stronger force. It is tragic that the government had to pander to the whims and caprices of the heartless beasts masquerading as religious fighters.

These are the same ‘fighters’ who kidnapped the Chibok and Dapchi girls with the whereabouts of Leah Sharibu still being unknown for well over two years now. What really is the government trying to achieve by releasing the ‘captives?’ The insurgents may even misinterpret their release as a sign of weakness on the part of the Buhari led government and go on to wreck further havoc.


There should be strong arm tactics against the insurgents instead of this cowardly approach. We were amused when President Muhammadu Buhari said that the Nigerian army had technically defeated boko haram. Is it because it’s been ages since we heard Abubakar Shekau’s voice? What exactly is the parameter for this strange defeat?

The de-radicalization process should start with those yet to join the dreaded sect but who are potential targets for recruitment. There should be brutality meted out to those captured to serve as a deterrent to those already there or seeking to join. More importantly, the government should develop the North-East so that with sturdy infrastructure on ground, it will boost economic activities so that poverty and idleness which are two major tools for the recruitment of new members will be eliminated or reduced to the barest minimum.

Buhari has a duty to posterity to ensure the army’s victory over boko haram; anything short of this coupled with his disastrous economic policies will make him occupy a pride of place in the dustbin of history.

To Die in the South – Martin Beck Nworah (MBN)

24 thoughts on “The Release of the Boko Haram Prisoners: Issues Arising”