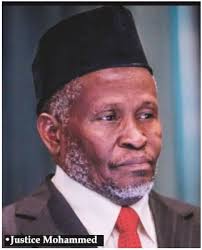 The Rise Of Tanko Muhammad, JSC, From Acting CJN To a�?Permanenta�� Acting CJN: We Saw It Coming

By the foregoing, therefore, the Inta��l Society for Civil Liberties & Rule of Law has not only been vindicated following its two earlier alarms raised in its statements of 18thand 19thApril 2019 (see www.intersociety-ng.org ), but also as it preemptively and correctly pointed out, the Acting CJN is on his way to breaking another dark history in Nigeria as the countrya��s a�?permanenta�� Acting Chief Justice of Nigeria or longest serving a�?Acting Chief Justice of Nigeria; meaning that Nigerians and members of the international community should expect another NJC a�?recommendeda�� extension on or before 25th July 2019 and subsequent ones on continuous basis until the a�?permanenta�� Acting CJN reaches his retirement age of 70years by 31st December 2023 or seven months after the end of the tenure of this present central Government of Nigeria (if not ousted judicially by electoral Supreme Court).

Mr. Justice Tanko Muhammad was officially born on 31st Dec 1953 and will be due for retirement as a Justice of Supreme Court of Nigeria (JSC) on 31st Dec 2023. The mandatory age of retirement for Supreme Court Justices in Nigeria is 70yrs. Police CP Ibrahim Magu was the first to break the dark history as Nigeriaa��s longest serving a�?Acting Chairmana�? of the Economic & Financial Crimes Commission, EFCC, without senatorial confirmation; having been appointed on 9th November 2015; a position he remains till date without senatorial confirmation.

Intersociety had in its statement of yesterday, 19th April 2019 accused the Buhari/Osinbajo Administration of reckless resort since June 2015 to crooked technicalities in matters of policies and governance of the country, instead of doing the right thing at the right time. We had also pointed out clearly that a�?if the Buhari/Osinbajo Administration could not utilize 90 days of 25th Jan to 25th April 2019 in transmitting to the Senate the NJC recommended nominee(s) to be confirmed as Nigeriaa��s next substantive CJN, then the same Administration would not get it done if given fresh 90 days (25th April to 25th July 2019); especially when considering the fact that the incoming 9th Senate will have less than 50 days after its presidential proclamation on 5th June 2019 or there about to attend to the same issue alongside other piled up top legislative matters including administrative hiccups, etc arising from the newness of many of its membersa�?.

Get Used To It People, But This Too Shall Pass

28 thoughts on “The Rise Of Tanko Muhammad, JSC, From Acting CJN To a�?Permanenta�� Acting CJN: We Saw It Coming a��”