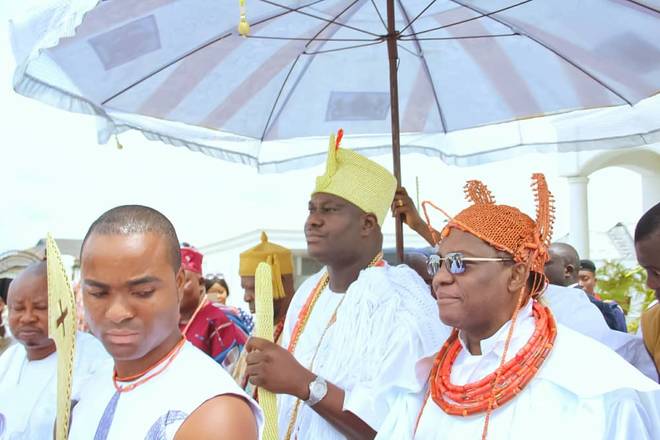 It is no longer news that Ile-Ife, the Source and Cradle of the Yoruba race have a calendar of three hundred and sixty-five less a day in respect to its festivals. These festivals come as a way of life, that is, culture of the people. It is no gainsaying that since his ascension to the throne of his forefathers, His Imperial Majesty, Ooni Adeyeye Babatunde Ogunwusi has made significant effort by promoting the Africa traditional beliefs and culture and ensuring performance of all festivals since October 2015 to date.

In the few years of his reign to date, Ooni Adeyeye has endeavoured to touch lives, physically and materially. He has been a household name in terms of promoting our cultural values as well as being a frontier for unity and peace, both at the national and international2 level.

At this yeara��s Olokun Festival, H.I.M got a collaboration in the area of peace keeping across the divide and this is no other person than his brother King, a descendant of the Oduduwa kingdom and a foremost custodian of the Africa Culture; The Oba of Benin, Omo Na��oba Akpolokpolo Ewuare II. The Oba was hosted by H.I.M on the first day of the Olokun celebration, 28 April 2018 at an elaborate reception at the Royal Court, Enuwa, Ile-Ife.

The visit showcased a display of culture of both the Benin and Yoruba people; the performance of the Benin cultural group, the Oonia��s palace troops among others was not only beautiful but the similarity in culture was highlighted. The Kings guards, music and the waist-twist on the dance floor were actually a�?things to write home about.a�?

I must recall that the last time such visit happened between both kingdoms was some thirty-nine years ago. The last visit which occurred in 1979 at the Royal Court, was done by the reigning Oba of Benin, Omo na��oba ni Edo Erediauwa to see the Ooni Adesoji Aderemi, on his ascension to the throne of Benin. The following year, Ooni Aderemi joined his precursors. It is however noteworthy that, Baba was delighted with Omoa��na��ba to the extent that he swapped his revered black leather seat with Erediauwa. Ooni Adesoji Aderemi was blessed to have witnessed three reigns of Oba of Benin before he passed. May our kings be blessed with long life in the land of the living (amen).

The crust on the visit this time is: the visit to the a�?Orun Oba Adoa�� and the symbolic gift presented to the Ewuare. Need I tell you to seat tight, fasten your seat-belt as I take you through the significance of the coatings.

Both selfless monarchs decided to visit the place named a�?Orun Oba Adoa�� meaning a�?the resting place of Edo kings.a�� Tradition has it that when a a�?ba of Benin passes, his head was sent from the Edo kingdom to the Orun Oba Ado in Aku (Ile-Ife) for burial while a bronze-head replica was sent from Ile-Ifa?? to Edo where the rest of the body would be buried. This goes to show the existence of a very close relationship between the Aku and Edo I suppose. On same note, Feyistan Opeyemi in a publication made on the 25 March 2012 stated that the reason may not be far-fetched from the belief that Aku and Ado are siblings and represent the Biblical Esau and Jacob. Reference was made to the book of Jasher 56:48 a�� 57:5. The major factor is that strong ties exist between Benin Kingdom and Ile-Ife as a descent of Oduduwa. Therefore, the monarchs were thoughtful to pay a visit to this site where they prayed to their ancestors, asking God for unity and peace within their kingdoms and Nigeria at large.

The choice of gift for the Oba of Benin was cardinal and a thoughtful move was made by H.I.M as he presented a gift which transcends beyond the physical, it is symbolic; it illustrates the bond between the two kingdoms, their vocation as professional hunter, and the link of brotherhood to Oranmiyan and further to Oduduwa.

To mark this historic visit, the two powerful brother-king and their entourage were hosted to a reception by the Osun State Governor, His Excellency, Ogbeni Rauf Aregbesola at the government house in Osogbo, Osun State.

The take-home of the visit according to H.I.M Ooni Adeyeye Enitan Babatunde Ogunwusi and the Omo Na��oba Akpolokpolo Ewuare II is that, both kings have the intention to foster unity and better understanding of the kingdoms. They also admonished the Commander in Chief of the Armed Forces, President Mohammed Buhari to ensure coexistence among Nigerians by resolving issues that impact the security of the country

The Olokun festival which was rounded up on 29 April 2018 witnessed a good number of people from within and outside Nigeria in attendance. The Olokun festival is an annual cultural festival in Nigeria, it is celebrated throughout Yoruba land and the Edo. The word Okun means sea while Olokun means the owner of the sea; the owner who is deemed the goddess of the sea. It is believed that the Olokun has the power to give children to barren women. She is also believed to be in control of ocean waves and could capsize sea vessels of evildoers at will. Olokun is also the goddess of riches and she has the power to bestow wealth to her devotees. The worshippers of Olokun are generally dressed in immaculate white attires with their faces paintedted with white chalk.

The Edo people celebrate Olokun in late February that is; 1st moon after the 12th moon. This takes place in Usonigbe, the site of Olokun’s shrine, in Edo State while the Chief Olokun shrine is located in the Ilode quarter of Ile-Ife, Osun State.

Long may our Kings live!!!

Purchase of Forms For Buhari: Thisday Newspaper And Its Fake Interpretation of The Electoral Act,