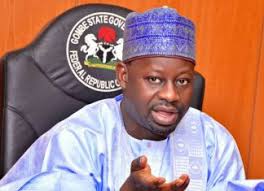 Gombe State may not have measured up to her slogan of a�?Jewel of the Savannaha�?, but for Ibrahim Dankwambo. The state was rustic and lacked the basic infrastructure befitting of a state before the incumbent governor came into power on May 29, 2011. The giant strides of the governor have practically led to the rebuilding of the state. It must be noted that despite the fact that Gombe is at the bottom of states on the ladder of statutory federal allocations, yet Dankwambo has succeeded in achieving much with the meagre resources.

The electoral promise of the governor to revolutionise agriculture in the state has since been fulfilled. He procured 225 units of tractor for the use of farmers and this has been followed up with the training and retraining of poultry farmers. He ensured regular distribution of fertilisers and other farm implements to farmers in the state.

This architect of development has constructed several markets in the state in his quest to encourage and boost cotton farming. The Dankwambo-led administration successfully established a Groundnut Processing Mill which has provided 4,600 direct jobs. The company now boasts of 326 heavy duty machines being used for milling 150 tons of groundnuts, 80 tons of groundnut oil and 70 tons of groundnut cakes on a daily basis.

Alhaji Dankwambo has equally proven himself as a promise keeper with his strides in the state education sector. The fellow of Institute of Chartered Accountants of Nigeria constructed over 502 classrooms across the state. He also ensured the recruitment of over 1,000 degree and NCE graduates into the state education sector and approved the training of over 5,000 teachers to enhance their productivity.

He also established the School of Basic and Remedial studies in Kumo as well as the College of Education in Billiri. Besides, he established the Gombe State Polytechnic in Bajoga and the College of Legal and Islamic Studies in Nafada. It is to the credit of Dankwambo that 25 students of the state have been sponsored to India and the United Kingdom for Maritime Studies.

It is most heartwarming that schools in Gombe are now well equipped with modern facilities such as e-learning centres, e-libraries, ICT centres, laboratories, expansive and conducive classes, modern furniture and well motivated workers. All these contributed to the successes recorded by primary and secondary school pupils in Gombe in their external examinations.

Dankwambo set new record of achievements in the state heath sector. He upgraded the Urban Maternity in Idi to Children and Women Hospital. He has completed a newly constructed Dialysis Centre within the Gombe Specialist Hospital. He also stamped the feats with the construction of College of Nursing and Midwifery, Dukku as well as the Snake Bite Treatment and Research Centre, Kaltungo. It is noteworthy that patients are being brought from across the state and even as far as Cameroon for treatment in the health facility. Dankwambo also delivered on the supply and installation of four dialysis machines and two dialysis chairs.

It is incontrovertible that no sector in Gombe has been left undeveloped by Dankwambo since he became governor. He constructed and delivered close to 2000 units of two and three bedroom flats that are already being occupied. His flagship performance is the construction of 3000-seater International Conference Centre. The governor also constructed a big ultra-modern motor park in the state. He constructed a state-of-the-art tankers parking bay. This facility can conveniently house 300 articulated trucks. The project was necessitated by the hitherto regular occurrence of accidents in the state occasioned by indiscriminate parking of articulated petroleum trucks on the roads.

Poverty alleviation and youth empowerment have been of importance to the PhD holder. He has trained more than 3200 youths in six different trades at the four skills acquisition centres located within the state. Dankwamboa��s administration also trained 330 supervisors at the Citizenship and Leadership Training Centre in Jos. He recruited over 1500 youths as traffic, environmental and security marshals in Gombe. The youth that now live responsibly were hitherto entrenched in thuggery and other social vices before Dankwambo gave them a new lease of life. The governor trained a different category of 1000 youths in welding, fabrication, P.O.P and tiling.

Besides, his government trained another set of youths numbering over 1200, now known as Kalare, under the Talba Youths Reorientation and Rehabilitation Programme.

The state judicial sector has also benefitted from the transformational impacts of the Ibrahim Dankwambo- led administration. Not less than 162 laws of the state have been reviewed, aside the codification of existing ones. Gombe State judiciary headquarters has been tastefully renovated by the administration of Dankwambo. The governor delivered the construction and furnishing of law courts in the state as well as magistrates, upper and area courts. Judges in Gombe judicial system are regularly being sponsored to national and international conferences in a bid to broaden their intellectual horizons and enhance service delivery in the sector.

Building and upgrading of infrastructure in the state have been another area of major concern to the current administration which constructed not less than 13 major gully erosion sites, each of which is more than four kilometers long in a bid to curtail erosion problem. The governor also ensured the establishment of 30 hectares of woodlots in five council areas in the state. He deserves credit for the establishment of roadside plantations in the state metropolis. Also to his credit is the procurement of over 200 electricity transformers to ensure regular power supply in the state. The government ensured the provision of information communication technology equipment in the state.

He was adjudged the best northern governor in 2017 largely because of his performance in the area of road construction. The governor constructed over 3000 kilometers of roads with solar-powered lighting.

Adeniyi sent this piece from Gombe

29 thoughts on “The Steady Transformation of Gombe”