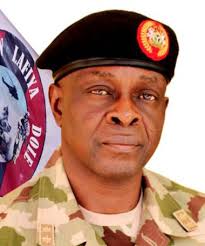 The Theatre Commander Operation Lafiya Dole, Major General Rogers Nicholas yesterday paid a visit to officers and soldiers who are currently undergoing treatment in medical facilities within the Theatre of Operation in Maiduguri.

A statement issued Monday by Colonel Onyema Nwachukwu, Deputy Director Public Relations, Theatre Command Operation Lafiya Dole said the Theatre Commander who was represented by the Deputy Theatre Commander, Commodore Aminu Hassan led an inspection team comprising of the representative of the General Officer Commanding 7 Division of the Nigerian Army, Colonel Kasim Sidi, the Chief of Staff Headquarters, Theatre Command Brigadier General Idowu Akinlawon and other senior staff officers on a monthly routine inspection of the inpatients’ wards and other facilities at the 7 Division Medical Services and Hospital, located in Maimalari Cantonment.

The team also visited troops who are hospitalised under referrals at the University of Maiduguri Teaching Hospital (UMTH).

Speaking during the visit, the representative of the Theatre Commander stated that the team was on a monthly routine inspection of medical facilities and routine check on the condition and recuperation of troops undergoing medical treatment of various injuries and ailments sustained in the ongoing Counter Terrorism and Counter Insurgency Operations against Boko Haram Terrorists in North Eastern Nigeria.

In his interaction with the patients, the Theatre Commander urged them to remain steadfast and positive, assuring them that their health and well being are of paramount interest to the Military.

He added that their sacrifice for the unity and defence of the sovereignty of the nation is not in vain and is very well appreciated by all Nigerians.

The Theatre Commander further lauded the efforts of the management of the University of Maiduguri Teaching Hospital and the 7 Division Nigerian Army Medical Services and Hospital for their selflessness in managing the inpatient officers and soldiers. He enjoined them not to relent in their service to the nation.

10 thoughts on “Theatre Commander Sympathizes With Injured Soldiers In Hospital, Urges Them To Remain Positive.. As He Carry Out Monthly Routine Inspection Of Medical Facilities & Services”