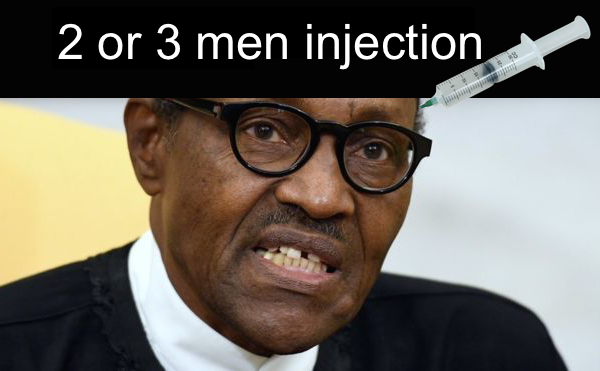 When Attorney General Malami told the court that he did not approve of the illegal detention of Dasuki, laying the blame squarely on Buhari and the Presidency, it was the last straw for me. Knock, knock. Who’s there? No one’s home. OK, I’ll toss my garbage into the window.

There is no Buhari. Whoever is in Aso rock is an empty carcass being used as a puppet. Nigeria is on autopilot. Every agency boss is his own boss as there is no President and commander in chief.

The army does what it pleases, as does the police. Customs does what it likes, as does the central bank. Once in a while Osinbajo steps in, but where the two or three men, the Kyari, Daura (and Funtua?), actual rulers of Nigeria block him, their wishes prevail or the status quo remains.

Anyone who has watched Aisha Buhari over the years will know there is no Buhari. I respect Aisha a lot and know she is a very decent human being. My personal experience with her makes me able to vouch for her. Let me quickly recount:

I was invited to and attended Buhari’s inauguration in 2015. But that was by no wish of the cabal or other APC empty-heads. Aisha Buhari at the time noted that diaspora contributed greatly to their victory and asked that a notable contributor be invited. One of her associates said I did a lot and so she extended an invitation to me. There were barely 300 initiations for the APC side, which were shared in, nepotistic and cronyism fashion as can be expected. My invitation was a rare example of a merit-based act, which only the likes of Aisha could do.

So for Aisha to come out every time and say a cabal control “Buhari.” I believe her totally. But how can a cabal control a man? That means the vessel is empty. How can Aisha keep saying this and return to stand by and hug the person? Would a normal man not be offended? Unless he is sick, not himself and cannot challenge her because she will expose him. This is a blackmailed vessel.

As a Medical doctor I am of the opinion that if it is Buhari then he had a lobotomy while on medical leave. A piece of his brain was cut off. Buhari’s medical diagnosis and the treatments he received in over 6 months of foreign medical leaves have been shrouded in top-level secrecy.

The story of Eva (Evita) Peron, the mid 20th century politically active, fiery First Lady of Argentina as exposed in a 2011 publication by Yale researcher Daniel Nijensohn, gives an idea. X-rays revealed holes in her skull consistent with a lobotomy. It was theorized that to possibly quell her cervical cancer-related pain, or silence her, a lobotomy was conducted on her. It is believed doctors created a make-shift operating theatre in a back room of the palace where they sliced her brain.

Lobotomies are procedures where connections between the prefrontal cortex and the frontal lobes of the brain are cut. It is possible Buhari had brain cancer and had a portion of his brain excised. This would explain his apathy – lack of concern about human life as portrayed by series of state perpetrated massacres and secret mass burials, freeing Boko Haram terrorists, sponsoring and enabling Boko Haram and Fulani terrorists, allowing a total deterioration of security with a tramadolized police chief, and extending the tenures of blood thirsty radical military chiefs, etc.

Alex Badeh’s assassination puts the severity of the collapse of national security into perspective, for the cabal at least. Nigerian masses, civilians and soldiers, dying in the thousands have since felt the pain of having no president.

It takes extreme apathy to watch Nigeria fail and not be concerned in the slightest. Only a psychological lobotomy, perhaps surgically conducted or chemical induced or perhaps as a result of tumor destruction of the neurons can lead to such docility and dumbing of emotions.

A simple x-ray may expose evidence of surgical lobotomy in Buhari.

There is no Buhari. The person or vessel there is like a Hitler. The angel of death spends long rotations in Nigeria while those exposed of corruption in and out of government are protected by the president(cy) without shame. They say president means “Buhari” or the vessel, and presidency means the two or three men.

It’s gotten so bad that human right organizations like Amnesty international and the United Nations’ UNICEF have been considered Boko Haram and persecuted by security departments under the Buhari vessel, while Boko Haram terrorists themselves are being freed and farmers are being threatened and forced to give up their ancestral land without compensation, to placate Fulani terrorists. No one can deny that no human President with present and functioning faculties will do these things.

Buhari only gave one single media chat since elected. That was in December of 2015. Since then the person or vessel occupying that seat has been carefully stage-managed to have conversations only when abroad under controlled environments with select participants. This is not without reason.

Nigeria is on autopilot. The president is missing. Or his brain is.

11 thoughts on “There Is No Buhari: It’s Possible The President Had A Lobotomy”