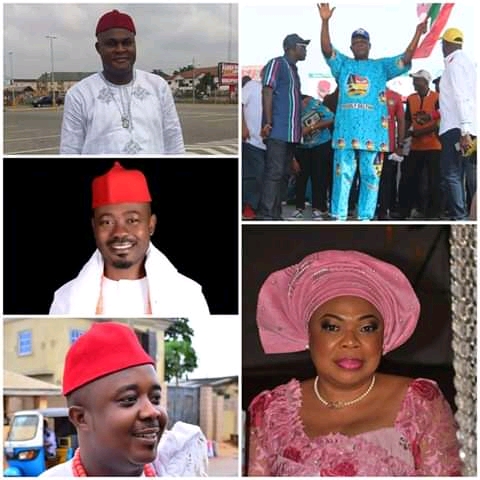 On 9th of March 2019, the good people of Aniocha South State Constituency would come out in their large numbers to choose who represents them at the State House of Assembly.

The decision of the people would rather mar the development of the area in the next four years or bring unprecedented development, the type that is uncommon in the history of the local government council since inception of democracy.

Aniocha south is made up of three clans or what could be called three geopolitical zones. By way of an unwritten agreement, the House of Assembly seat is rotated round these three zones for the sake of justice, fairness and equity.

Since the advent of democracy 1999, Anderson Makoma, from Ogwash Clan rose to represent the Constituency for eight years from 1999 to 2007 and he handed over to Onyemechi Dielonwu, now Evangelist Mrs Joan Onyemaechi Mrakpor, the Incumbent member representing Aniocha/Oshimili Federal Constituency from Ubulu Clan from 2007 to 2015.

The turn of Nzukwa Clan was jeopardized by the powers that be with high profile connection, Angela Nwaka, from Ogwash Clan came on board under the administration of the immediate past governor of the state, Dr Emmanuel Eweta Uduaghan, from 2015 till date.

The incumbent member representing the Constituency made efforts to return under her former party, the Peoples' Democratic Party (PDP), but lost the ticket at the party's primaries to a first timer and immediate past Commissioner of Agriculture and Natural Resources, Chikezie Chika Austin, from Nzukwa Clan who resigned his appointment for the race.

In the 2019 polls, Nzukwa Clan, especially now that it is their turn, has two qualified sons battling for the seat with the emergence of Gospel Ifechikwu Amaliamifeobu, of the Labour Party (LP).

The incumbent, after losing to the current PDP candidate, defected to the All Progressives Grand Alliance (APGA), to pick the ticket for her to be able to return and complete her eight years on the ground that others got eight years of two tenures.

If that happens, Ogwash Clan will be heading for 16 years, forgetting that it was not the turn of Ogwash to produce the next House member to represent the Constituency.

NKWOR RITA ONYEKA ZLP.
With the release of the final list by INEC, Aniocha south people are ready to go to the poll to elect who represents them in the next four years.

Of the 23 Candidates, five are outstanding but only one stands out to win the mandate of the people; these are: Chikezie Chika A, of the PDP, Angela Nwaka, of APGA (current incumbent member), Izedunor Rister Chiendu, of the APC, Enujeko Chinedu Joel, SDP and Gospel Ifechikwu Amaliamifoebu, of the LP.

The candidature for the PDP, torn the party apart as his alleged sponsor, Mrs Onyemaechi Mrakpor, who lost the primary to Hon. Goodwin Ndudi Elumelu, purportedly demanded the ticket from him but Chikezie, refused to let go his opportunity.

The baby that was backed by Mrs Mrakpor, was let loose after she allegedly tried severally to get the ticket from the baby who on discovering that he has no backbone quickly ran to pitch tent with Elumelu.

However, the turbulence the refusal caused is gradually dying down after the state governor, Dr Ifeanyi Okowa, wadded into it for the party to speak with one voice to forge ahead and to defeat their common enemy in the general elections, especially the governorship election.

The possibility of Chikezie, also winning the election is also in doubt as his years as councilor in Ward 8, Vice Chairman of the council, member, Delta State Liberary Board and Commissioner are with little or no impact in his community, Ejeme-aniogor.

While the factor that may likely work against the APGA candidate is the fact that some leaders of the PDP in Ogwashi-Uku, where she comes from are skimming for the position of commissioner and have queued behind Chikezie, to go to the House to enable them achieve that dream.

Another factor that may scuttle her ambition, is the allegation levelled against her that she diverted the Constituency budget in 2016, to build hospital in the United States of America (USA), from where she came to run election in her state.

The APC candidate, Izedunor Rister Chiendu, is allegedly a G-boy whom his partners are sponsoring.

Unconfirmed source have it that operatives of the Economic and Financial Crimes Commission (EFCC), are on his trail.

He also is from Ogwash Clan that have tasted the “state cake”.

Also, the SDP candidate whose programmes teeth towards the youths and women with plans for quality representation but may not have it due to followership challenges.

Currently, from every indication, the LP candidate seems to be pulling weight and has the brightest chances of clinching the seat as the pendulum has come to rest on him like when the star stoodup on Bethlehem when Christ was born.

Investigation revealed that his opponents either directly or through middle men have called him to drop his ambition and collapse his structure for them.

Several meetings with prizes attached to them have been called all to take him from the stage as to them he is eminently qualified than they are.

His Quality Legislation, Economic Emacipation, Accountability and Projects encapsulated in LEAP2019 Mandate, has brought his acceptability to the people.

In politics, it is not about the party, though, it is the platform on which Politicians aspire, the constituents and Constituency should look inward to who have them at heart.

This is a Clarion call not only for Aniocha south but the entire 25 local government councils to choose candidates with good programmes for their people. If this is done, Delta will be the mini Dubai that we all have prayed for.

69 thoughts on “These zones are: Ogwash, Obulu and Nzukwa clans.”