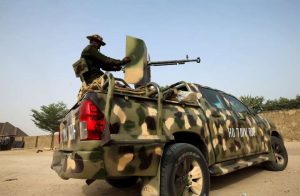 Some 2,000 people have been forced to flee to the northeastern Nigerian city of Maiduguri ahead of a major offensive against Boko Haram, emergency services and residents told AFP on Tuesday.

Evacuated residents were taken to a�?Bakassi IDP [internally displaced persons] Camp by the military for their safety as a result of ongoing operations to flush out insurgents in the area,a�? said Abdulkadir Ibrahim.

Camp officials were a�?mobilizing resourcesa�? to care for their basic needs, he added.

The residents of Jakana said they were given no notice.

Modu Kaka said: a�?The soldiers came this morning and told us to assemble and began herding us into trucks.

a�?We left all our possessions in Jakana and we are now dependent on food aid.a�?

Bakassi is one of several camps in the city housing thousands of displaced people, who live in squalid shelters and rely on food handouts from aid agencies.

An unnamed military official in the city said the evacuation was in preparation for a a�?big operationa�? against Islamic State West Africa Province (ISWAP), the IS-linked faction of Boko Haram.

Jakana lies on a known crossing route for ISWAP fighters moving between their camps in the Benisheikh forest area of Borno and their hideouts in the Buni Yadi area of neighboring Yobe state.

In January ISWAP sent letters to Jakana and Mainok residents asking them to vacate their homes for an impending raid on the military.

a�?We know they are going to use their traditional route to escape,a�? the military source said.

Boko Harama��s decade-long insurgency has killed more than 27,000 people in the northeast with 1.8 million still displaced from their homes.

The conflict has spread to neighboring Niger, Chad and Cameroon, prompting a regional military coalition against the jihadists. (AFP)

Most Of The Trucks Around Are Not Road-Worthy, Says FRSC Sectional Commander