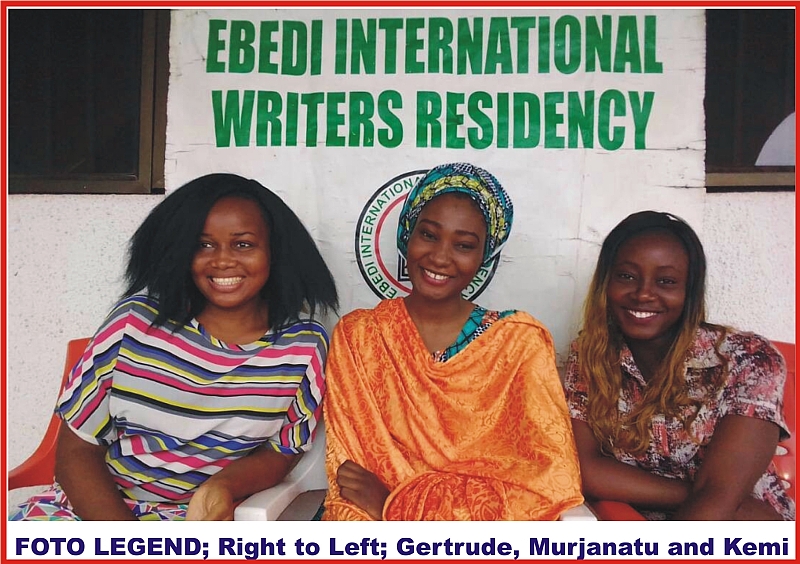 Murjanatu who is from Kano State studied Mass Communication at the Federal Polytechnic Bida, Niger State and has worked variously as a Presenter at Dala FM Kano, and later as a Journalist at the Daily Trust Newspaper Office in Kano. A published author (The Morgue, 2017),Murjanatu’s hobbies include Reading, Writing and Singing. She hopes to spend her time in Ebedi to complete her new Collection of Short Stories and also to mentor secondary school students in Iseyin and environ in the art of Hausa songs and poetry.

The second writer, KemiFalodun from Ondo State is a graduate of Microbiology from the ObafemiAwolowo University, Ile Ife. She was the Associate Digital Editor of Sarabamagazinefrom where she moved to OYA magazine in 2015 as the Editor. A lover of Fiction, Poetry and Opinion pieces, Kemi hopes to use her time in Ebedi Residency to complete her Poetry Collection. She will also interact with secondary school students in Iseyin in the areas of Drama and Poetry.

Gertrude Uzor, the third writer is an Ebedi Fellow having previously attended the Residency in 2014. A native of Anambra State, Gertrude is a graduate of Computer Science from the NnamdiAzikiwe University, Awka. Apart from writing, Gertrude is also a Singer and an Actress. She has appeared in a Nollywood film and given various performances as a singer. In 2012, she published her first novel; ‘’One Love, Many Tears’’ a 250 page Thriller Romance. She hopes to spend her time in Ebedi to complete work on a collection of Short Stories as well as Poetry Collection. She will mentor Iseyin students in the arts of Singing and Acting.

The Ebedi International Writers Residency is a private initiative for writers willing to complete their ongoing works in a conducive environment at no cost. Since its inception, eight years ago, the facility has hosted about 90 writers from 10 different African countries.Italso offers publishing opportunities to its Fellows through the Literamed Publishers, Oregun Lagos.

PENCHANT FOR VIOLENCE AND THE CULTURE OF IMPUNITY