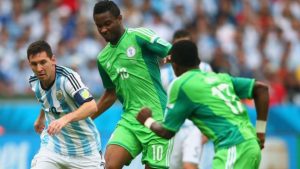 Few countries, especially those from different continents, have met each other more than Nigeria and Argentina.

They have met at Under-17, Under-20, Under-23 and senior level, dating back to 1993 when Nigeria’s U17s played Argentina for the first time.

A year later, the senior sides met at the 1994 World Cup and have clashed a total of six times since.

Here are a few things to look forward to in Tuesday’s meeting in Krasnodar :

Landmark match for Mikel
Rested for Friday’s 1-1 World Cup qualifying draw against Algeria, skipper John Mikel Obi is expected to return to the lineup against Argentina.

Mikel first played against the South Americans at the 2005 Under-20 World Cup Final, where he squared up to and lost against a Lionel Messi-inspired Argentina, emerging with the silver ball behind the then-budding Argentina icon.

Mikel again lost to the Albiceleste at 2008 Olympic Games Final, but found some joy when he played in the side that beat them 4-1 in a friendly game in Abuja in 2011.

That joy was temporary, as the Argentinians claimed revenge a few months later in Bangladesh, routing Nigeria 3-1 in Dhaka. Mikel captained the Super Eagles for the first time that day in the absence of regular skipper Joseph Yobo.

On Tuesday, Mikel will mark another landmark when he leads the Super Eagles out, this time, as substantive captain .

It will be his 80th official appearance for Nigeria, making him only the fifth player to reach that milestone for Nigeria.

Musa could add to Argentina goals
It has been a torrid 18 months for Ahmed Musa since leaving Russia. A fan favourite during his years at CSKA Moscow, Musa has fallen on hard times since leaving them for former Premier League champions Leicester City.

The forward has barely featured for his new employers, and with competition growing in his wide forward position, could be in real danger of losing his squad place when the Super Eagles return to his former stomping grounds in about seven months’ time.

Ironically, he is one of five Nigeria players who can boast of having scored against Argentina at senior level. The others being Samson Siasia, Ikechukwu Uche, Obinna Nsofor and Emmanuel Emenike.

Of that group, Musa and Uche stand out as the only two to have scored a brace, and Musa scored his at the World Cup.

Returning to Russia, and hopefully getting a chance to play more than a cameo role, should inspire the forward to regain some of the form he has lost in the last year and make it harder for competitors trying to wrest his World Cup spot.

Maybe with another brace?
Rohr’s growing legend
Like Clemens Westerhof before him, Gernot Rohr came into Nigeria under-promising, but has seemingly over-delivered.

The German has qualified the Super Eagles for the World Cup with little fuss, and from a group that really should have been much more testing in its scrutiny of the eventual qualifier.

He has done so while overhauling the squad, and lowering its average age. And then extending Nigeria’s unbeaten record in World Cup qualifying .

This friendly against Argentina gives the coach one additional opportunity to script even more legend into his story, by becoming only the second Nigeria coach to defeat Argentina – if he can manage it.

If he does, he would also be the first to beat them away from home.

One thing is for certain, Rohr’s legend will certainly grow if he can mastermind a win against Messi and co.

– African viewers, the game between Argentina and Nigeria is LIVE on Kwesé Free Sports tonight at 18:30 (CAT). Click here to find out how and where you can get Kwesé TV .

Chelsea close on United after 2-0 victory over Brighton