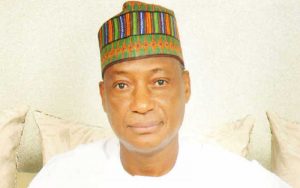 I am deeply worried about how this man called Mansur Dan-Ali, who happens to be Nigeria's defence minister, has been going about his demand for grazing land for his kinsmen. In this modern era of ranching, he wants grazing lands and grazing routes for Fulani herdsmen across the country, and stresses it with so much impunity. Dan-Ali, despite his critical portfolio, does not give a damn, no matter whose ox is gored. He has refused to accept that nomadic cattle nurturing is an aberration in any modern society. As a result, this minister has been making all sorts of retrograde moves in support of open itinerant grazers. Dan-Ali, without gauging the mood of the country, persistently makes volatile statements that embolden the killer herders. This is hazardous for mother Nigeria.

The other day, our defence minister was all over town, running his mouth about the need to suspend anti-open grazing laws in Benue, Taraba and Ekiti states, while also demanding for safe routes for herders. He had earlier advised the nation's Security Council, presided over by President Buhari, to stamp out this pragmatic law. This is even after the National Economic Council, presided over by Vice President Yemi Osinbajo, had endorsed ranching. Dan-Ali pretends to be unaware that the 1999 Constitution empowers state Houses of Assembly to make laws for the good governance of their states. He is shamelessly ignorant that states are empowered by the Land Use Act to take ownership and management of land resources and wants the federal government to dabble into state affairs.

Killer herders, motivated by Dan-Ali and his likes, are still wreaking havoc across the country. They have slaughtered thousands of Nigerians, unhindered. From Kaduna, to Benue, Nasarawa, Taraba, Kogi, Zamfara and Enugu, it has been tales of massacres. In fact, in Benue State, the killer herdsmen control some local governments like Gwer West, Gwer East, Logo and Guma. Guerrillas protecting herdsmen roam freely unhindered by security agents. Patriots must not wait for Dan-Ali and his likes to set the country on fire before screaming.

It is heartwarming that patriots are already tackling Dan-Ali and his principal, Buhari. This has to be sustained until this clannish defence minister is sacked. Senator Barnabas Gemade's reprimand was appropriate. He said: “This is not the first time that we will hear this kind of absurd statements coming from no less a personality than the Minister of Defence. If a Minister of Defence is calling for anarchy, where else can we find peace? We understand that the minister comes from Zamfara State and I wonder if all the killings in Zamfara that are almost equal in number with the ones in Benue, are also as a result of the anti-open grazing law.

“If by his own experience, the killings in Zamfara have nothing to do with the anti-open grazing law, why does he believe that the killings in Benue and Taraba are because they enacted the laws? While we are looking up to the government for protection, and indeed looking up to the security agencies for protection, we get so dismayed by the attitude of those who lead these security forces.”

A coalition of socio-cultural groups in Benue State, comprising the Mdgzou U Tiv, Idoma National Forum and Omi'Ngede, wondered “how a supposed educated and professional soldier will call for the suspension of an act of parliament in a democracy.”

The group added: “We are tempted to deduce from the utterances of Dan-Ali that he does not understand or he is not familiar with the letter and spirit of Nigeria's constitution, which he swore to uphold. He should help himself to be abreast of the document before making statements or suggestions. It seems to us that Mansur Dan-Ali imagines that the current democratic dispensation is a military rule where decisions are taken unilaterally.”

The spokesperson for the apex Igbo group, Ohanaeze Ndigbo, Prince Uche Achi-Okpaga, believes Dan-Ali is suffering from “political malnutrition because of his military background, and thinks that his pronouncements are law, without recourse to the legislative process.” I concur.

Dan-Ali's utterances amount to an assault on our oneness. We must rise and put pressure on Buhari to sack Dan-Ali in order to protect our fragile unity. This is one man his government can as well do without. Dan-Ali should return to his native Zamfara and lead the war against bandits ravaging the state.

Confession of Citizen Victor Uwajeh
For those who have not been following the story, Victor Uwajeh was until few weeks back, the Special Investigator to the Okoi Obono Obla-led Special Presidential Investigation Panel on Recovery of Public Property (SPIP). Uwajeh, then based in London, was disengaged in controversial circumstances. Thereafter, he alleged that his removal was because he refused to investigate some serving senators, including Senate President, Bukola Saraki, and other opposition People Democratic Party (PDP) stalwarts.

He also mentioned former Vice President Atiku Abubakar, Rivers State Governor, Nyesom Wike, Senator Jonah Jang, Mrs. Patience Jonathan, Femi Fani-Kayode, among the list of persons specifically given to him to investigate. Uwajeh, who was also a consultant to the Economic and Financial Crimes Commission, alleged that his refusal to act on the documents sent to him from Nigeria by the government which comprises some names perceived to be enemies of the current administration was responsible for his disengagement.

The private investigator, now in exile in Dubai, said in his statement: “It was the procedure of the panel to courier documents to me from Nigeria for dispatch to various agencies in the United Kingdom and worldwide. Soon after, I realised that the panel has a mindset towards certain individuals and groups by the documents it sent to me. Documents sent to me from Abuja to dispatch to the Serious Fraud Office and Home Office, Metropolitan Police, FBI and EUROPOL had the names of the following: Senate President Bukola Saraki, Deputy Senate President Ike Ekweremadu, Senator Albert Bassey Akpan and Senator Stella Adaeze Oduah.

“I suggested some names of APC members, who are high looters, and recommended for proper investigation but it was turned down. This raised a red flag and as a professional, I made my complaint immediately and made my position known to Okoi Obono Obla to transmit to the Attorney General and Minister of Justice. I told him that I will not be a party to a one-sided investigation to muscle the opposition and persecute them. I made my position known that I am ready to expose corruption and recover stolen assets as a professional but will not be involved in the politics of 'pull them down' in Nigeria.

“After meeting in London on 18th April, 2018 with some officials during the CHOGM, it was evident that I will not bulge in my position not to go against the ethics of my profession by investigating only the opposition. As soon as they arrived Nigeria on April 23, 2018, they drafted a letter to disengage me. They kept the letter and wanted me to change my mind but I refused. On April, 27 2018, they sent me a backdated letter of disengagement dated April 23, 2018.”

Clearly, Nwajeh wanted to investigate all those alleged to be corrupt, regardless of party affiliations. His mandate evidently stated that he should trace, and where necessary, recover undeclared assets and proceeds of fraud for the Federal Government of Nigeria. Suddenly, he was told to look only at a specific direction. This man wanted to do a dispassionate job, but was stopped. What a country! What I find intriguing is that precisely 25 days after Nwajeh's mind-boggling allegation, the Obono Obla panel and the other government agents indicted have refused to respond. This is clearly not how to fight a war against corruption. A selective war against corruption will not take this country anywhere.

The Zamfara Killing Field
There seems to be no end to the killings in Zamfara State. The bandits again on Wednesday stormed several villages in Birnin Magaji, killing scores of people. Few days back, they attacked 10 communities in Mada town, Gusau Local Government Area of the state. A yet to be ascertained number of people were killed during the raids. Fleeing villagers estimated that about 200 bandits descended on the communities, stealing cows and other animals. As at press time, the likes of Fura Girke, Majira, Kanawa, Yargeba, Takoka, Bargaja, Bundungel, Bantsa, Unguwar Matanda and Makera, had become ghost villages. Most of the inhabitants are too scared to return.

The state's Deputy Governor, Malam Ibrahim Wakkala, who visited some of the affected communities could not offer succor. He only appealed to the federal government to come to the rescue of the hapless people. Wakkala also expressed his dismay about the way the bandits rendered residents of the communities, particularly women and children homeless.

He followed up with the usual tame government rhetoric: “A committee has been set up by the State Government, to ascertain the level of damage caused by the bandits. We are appealing to security agencies in the state to intensify efforts in tackling the activities of the bandits.” Wakkala departs after the painful razzmatazz. So, what happens next in terms of security for the people? Nothing! The federal government and the Zamfara State Government persistently fail the people. The rampaging bandits have been moving from one local government to another, killing hundreds of people. The ruin of Anka is still fresh. For how long shall the people of Zamfara State continue to bury their loved ones? The situation here, just like in other parts of the country, looks hopeless.

Some Middle Belt/Southern Nigerian leaders met in Abuja recently and raised issues which I consider pertinent for the survival of this country's democracy. Top of this was the call on President Muhammadu Buhari to relieve the Chairman of the Independent National Electoral Commission, Prof. Yakubu Mahmood, of his duty, siting the likelihood of bias in favour of the president.

The leaders urged Buhari to act on the 12-point resolutions of the National Assembly on the state of the nation i.e. call out the Inspector General of Police, Ibrahim Idris; uphold the powers of the states to enact laws on open grazing of livestock; stop the killer herdsmen and take urgent steps to make the country more secure for the citizenry, amid others.

I also have my fears about Mahmood's ability to deliver a free and fair election in 2019. The Ekiti State governorship election will be his first major test. Fears that INEC will manipulate the Presidential election in favour of Buhari, considering Mahmood's geographical origin and the President's links with an INEC National Commissioner, Amina Zakari, a relation of the President, can't be waved aside. Buhari's decision to keep the unproductive military Service Chiefs, whose tenures lapsed last year, is also suspicious.

My take away from the Middle Belt/Southern Nigerian leaders' memo to Buhari is: “We have fears that the Independent National Electoral Commission may not be able to deliver free and fair election as the bug of nepotism and sectionalism that this administration is renowned for has also eaten up the leadership of the commission. We are concerned that since independence, Buhari is the only President that has been audacious enough to pick only people who are either his relations or of the same ethnic stock with him to lead the electoral body.”

Nigerians must persistently challenge Mahmood's INEC to rise above ethnic, religious and political sentiments during the 2019 election. We must also persistently put pressure on our President to allow a free and fair election. He was a beneficiary of this in 2015.

First published in This Day

IMOLITES: THE PROSPECTS AND PERFIDY

2019 Election; Terminating A History Of Mistakes