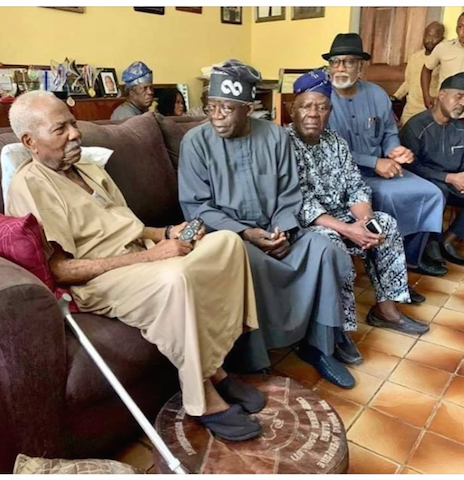 The National Leader of the All Progressives Congress, APC, has called for caution over the tagging of Fulani herdsmen as those behind the killing of the daughter of Pa Reuben Fasoranti, Mrs Funke Olakunrin.

Tinubu, who paid a condolence visit to the Afenifere National Leader in Akure, the Ondo State capital on Sunday over the murder of Mrs Olakunrin by those suspected to be herdsmen, stated that Fulanis should not be held responsible for the incident.

The former Lagos State Governor who emphasized that the origin of kidnapping can be traced in the country, maintained that the death of the 58-year-old should not be used to divide the country.

“I’m extremely concerned about security, I don’t want a stigma, I can go through history of kidnapping in Nigeria and we know how and where it all started, there are a lot of copycats.

“How many years ago have we faced the insecurity in the country? There are cases of kidnapping, is Evans too, who was arrested and made disclosures, also a herdsman?

“I don’t want to be political, but I will ask where are the cows?”

He added that with the spate of insecurity in the country, it was time to face it squarely and put an end to it once and for all.

“I am a nationalist and the securtity concern and challenge right now must be faced squarely throughout Nigeria.

“We must not use this incident to divide ourselves but we must use it as a cure to the security problem. Additional police, additional patrol, and additional security reinforcement along Ore road and various flash points across the country is necessary and I have discussed this among the various authorities. The governor (Akeredolu) is eminently aware and being proactive about this.

“The security challenges are numerous across this country and to fight it we are going through that, more police are being recruited and it takes time to train and deploy them to various areas, nobody prepares more than necessary for this.

“But if you look at Zamfara, Osun, Ondo, Ekiti and all areas, then we need to fight poverty, unemployment and the causes that might lead people to crime.

“Equally we must create opportunity to convert this tragedy to prosperity.”

While describing the death of Mrs Olakunrin as a sad one, he disclosed that him and the deceased chatted few days to her death.

“The incident that affected one member of our family Mrs Olakunrin is seriously sad, and unacceptable but nobody can return her alive, she has answered the call of her creator.

“Funke is very close to me and she died a premature death. Only four or five days ago, we chatted and I know what she discussed with me and about Baba’s health conditions. We just pray that this will not happen again,” Tinubu said.

Recall that the deceased was reported to have been shot dead by suspected Fulani herdsmen in her Land Cruiser SUV within the Ore axis of the Benin-Sagamu expressway.