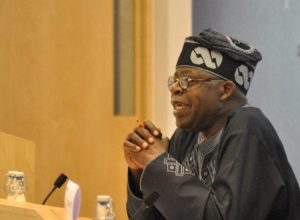 Asiwaju Bola Ahmed Tinubu, national leader of the All Progressives Congress (APC), has urged Nigerians to resist all appeals to a�?unthinking passions and old prejudicesa�? and instead follow their conscience in picking their next crop of leaders in 2019.

At the annual Daily Trust Dialogue in Abuja today, he implored Nigerians not to allow politics as usual to decide the 2019 election season. His speech was read by a former commissioner for finance in Lagos State, Olawale Edun.

a�?We must insist on the principle that elections do not return to being games played by a well-heeled elite while the rest of the nation is left to struggle and starve,a�? he said while addressing the topic, ‘Nigeria and the Challenges of 2019, this is Not a Game’.

a�?The people must resist all appeals to unthinking passions and old prejudices. We must adhere to what our conscience reveals as the best path to good governance for all.a�?

Tinubu said while democratic politics inherently bears aspects of competition and contest, it must never be reduced to a mere game. According to him, the objective of a game is served by the mere playing of it.

a�?Playing the game is an end in and of itself. However, this cannot be the case with politics and elections,a�? he said.

a�?Winning the political contest can never be an end in itself. The proper outcome of electoral victory is not for the victor to revel at his good fortune or his skill in electioneering.

a�?The inevitable sequel to an election is for the winner to assume the sobering burden of governance. Elections are not the climax of an epic book. They are merely the close of the book’s opening chapter.

a�?What comes afterwards a�� governance a�� is much more vital than politics, for governance determines how we shall live.a�?

He lamented that although the country is approaching 60 years of nationhood, it has remained a complex yet incomplete work of art and a project as much on the drawing board.

a�?They see the nation not as object of loyalty but as the most available platform to realize their personal aims. In their minds, Nigeria is lesser than their ever expanding ambitions; because they view Nigeria as a game, their politics is but a game within a game.

a�?Rather than becoming a joyous nation, Nigeria has become a cruel playground where the fears and concerns of the average person get exploited but their interests never get promoted.a�?

He said it would require many years of outstanding governance to heal the ills that have bedevilled Nigeria as a nation. He also urged the Federal Government to solve the problem of fuel subsidy, which he said, has caused more pains than solutions.

a�?As a progressive, I believe we must transform the nation by embarking on deep and impactful reforms, by creating more jobs, providing social policy initiatives and building an infrastructure befitting a leading nation. Social services must become a reality close at hand and not a vague dream lying in the distance.

a�?For example, we must reform the current fuel subsidy regime. At this stage it causes more problems than it cures. Bottlenecks of long fuel queues, erratic supply, resultant economic dislocations for consumers from lack of fuel and the corrupt practices of trade insiders undermine the good intentions upon which the subsidy is based.

a�?Currently, the subsidy does not benefit the average person. It sweetly profits the elites who manipulate the programme to their own advantage. We need to allow market forces to more directly determine price. We need to open the now closed market to more suppliers. In this way, we may better harmonise supply and demand, where they do the most sustainable economic good.a�?

Tinubu’s speech also touched on the herdsmen-farmers crisis in the country.

In his view, the crisis has an economic origin and declared nomadic way of life as obsolete.

a�?The crux of the matter is that the nomadic way of life is fast becoming obsolete. Large scale nomadic practice does not belong in this day and age. This is reality and it is inescapable.

a�?Thus, herders have no right to cling to this way of life by killing others. Government must stop their violence but also offer them a viable new way of life by moving them toward more modern, non-nomadic cattle rearing

a�?As we commend these security measures, we must not lose sight of the fact that the problem bears an economic origin. Thus, agro-economic policy initiatives must help shape the lasting solution.

While he commended the deployment of law enforcement agents and the military into the troubled areas as a way of stemming further loss of lives, he also urged government to establish a a�?relief and rehabilitation programme for those families and communities that have been so grievously harmeda�?.

a�?In short, to resolve this lethal problem, government must implement a multi-dimensional policy that encompasses security, agro-economic, educational and emergency relief elements. This is the art and mastery of governance that our nation and its complex problems requirea�?, he said.

11 thoughts on “Tinubu to Nigerians: Vote your conscience in 2019”