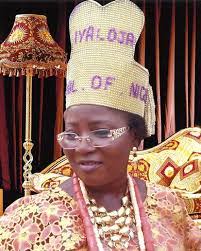 Tinubu Ojo who succeeded her grandmother Alhaja Abibatu Mogaji as the Iyaloja General of Nigeria, is set to take over the administration of all public and private own markets in the city state of Lagos.

Traders in the trade Fair complex most of whom are Igbos had the authorisation of the Federal Government of Nigeria, to set their stalls there, but with the coming to power of APC at the federal level, Tinubu Ojo has gained the control of all markets operating in federal spaces in Lagos.

Traders in their thousands on Monday 18th March were shocked, as fierce looking policemen cordoned off the market, enquiry revealed it was on the order of Tinubu Ojo, who directed the market union leaders to report to her Ikeja Office for required modalities that will lead to the reopening of the market.

Report made available to this medium reveals that markets unions in the state, who hitherto were not under Tinubu Ojo’s control are preparing to go and conference with her to avoid the fate that befell “trader fair” traders.

Report has it that markets mostly dominated by the Igbos and other none natives in Lagos will undergo relocation especially Ladipo and Computer Village markets immediately to forestall the deployment of the electoral strength of the Igbo traders in future elections in Lagos State.

Tinubu Ojo a card carrying member of APC takeover of markets is a fall out of the general elections. Most Igbo businessmen in Lagos are sympathetic toward the main opposition party, the Peoples Democratic Party, (PDP) and her candidates. Despite the carrot and stick approach made by the APC Lagos State chapter to court the Igbos, they stood firm with PDP.

APC thugs were captured on video snatching ballot boxes, burning ballot papers, threatening the Igbo residents, sternly warning them not to dabble into politics in Lagos, or risk economic clamp down, during the presidential and national assembly elections. So massive was this attack that the Independent National Electoral Commission INEC had to conduct reruns in these areas.

This move however scared the Igbo stock resident in the state, who collectively agreed to abandon their civic rights in subsequent elections in Lagos State, due to xenophobic attacks on them in the two window, between the presidential and gubernatorial elections.

The Senator representing Lagos Central Remi Toritsheju Tinubu, the wife of the National Leader and Folashade Tinubu Ojo’s step mother was captured on video telling a disabled Igbo man who beged for a handout that she and her family no longer trust the Igbos, since they know they do not vote APC.

Now that Tinubu Ojo has bared her fang, how it will play out remains to be seen as the Igbo merchants in Lagos contributes 75 percent of the state gross domestic product.

JUST IN: Fire Breaks Out At Agboju In Lagos