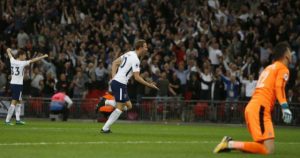 Tottenham secured qualification for next season’s Champions League after beating Newcastle 1-0 through Harry Kane’s second-half goal to move into third place in the Premier League on Wednesday.

With Chelsea drawing 1-1 with Huddersfield on the other side of London, Tottenham is guaranteed a top-four finish heading into its last game of the season — at home to Leicester on Sunday.

Spurs will be in the Champions League for the third straight season, playing host to Europe’s elite competition in a new stadium being built on the site of its White Hart Lane ground. They have played this season at Wembley Stadium.

“It is a massive achievement to qualify again,” Tottenham manager Mauricio Pochettino said. “I want to congratulate the players … It is a massive effort, 38 games away from home is a huge effort.

“Next season, it will be fantastic for Tottenham to be playing in a new stadium and in the Champions League.”

Kane curled in the winner from the edge of the area in the 50th minute for his 28th league goal of the season, leaving the striker three behind Liverpool forward Mohamed Salah in the race to become the Premier League’s top scorer.