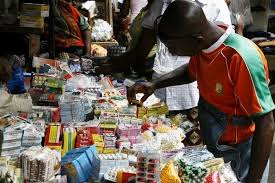 Onitsha, Eastern Nigeria, Feb 10, 2020-The Int’l Society for Civil Liberties & Rule of Law has written to Gov William Obiano of Anambra State, the State Commissioner of Police and Director of SSS, insisting that traders of the Onitsha Drug or ‘Ogbogwu’ Market must be allowed to choose their leaders through popular and credible election. Intersociety also called for end of endless imposition of Government appointed caretaker committees for the Market and renewal of their ad hoc tenures. We further demanded strongly for scrapping, discontinuation and abolition of all forms of direct and indirect Government extortions in the Market.

The letter, a public interest type, was dispatched on Sat, 8thFeb, 2020, but dated today, 10th Feb and referenced: INTERSOC:003/02/20/ANSG/AWK. It was signed by Emeka Umeagbalasi, Board Chair, Obianuju Igboeli, Esq., Head of Civil Liberties & Rule of Law and Chinwe Umeche, Esq., Head of Democracy & Good Governance. Copies of the letter, with a forwarding letter, were also sent to the State Commissioners of Commerce and Health as well as the Divisional Police Officer in charge of the Fegge Divisional Command of the Nigeria Police Force and the President General of the Onitsha Bridgehead Market; for their knowledge, advice and cooperation where necessary.

Intersociety further maintained that imposition of caretaker leaderships or committees and ‘procured’ extension of their ad hoc tenures as done by the present Government of Anambra State expressly breed rancor and acrimony and threaten the general security of lives and properties within the Market and in the larger Environment or Society. They also promote social vices and criminalities including rampancy of trafficking on fake and illicit drugs and consumption of same in the Onitsha Drug Market.

Intersociety pointed out strongly that considering the vulnerable nature of the Onitsha Drug Market on human health and environment, the all-important Market ought to and must be governed at all times by the popularly and credibly chosen market leaders. From background checks done by Intersociety,the last time the Onitsha Drug Market had an election for its leaders was in 2014, which ended in 2018 with four-year tenure and since then till present, it has been one caretaker committee after the other, courtesy of the Government of Anambra State.

Today, it is most likely correct to say that the all-important Market is catapulted back into the cave and has been polarized, privatized, personalized, deeply divided, corrupted, debased, devalued, mangled and manipulated. It is also now reduced to ‘a Government Pit for sundry extortions’; with Anambra State Ministries of Health and Commerce (if not including Environment) and Office of the Chief of Staff having a field day, struggling to out-smart one another using covert and overt extortion brigands.

From our several checks, the all-important Market (Onitsha Drug Market) has become ‘a den of sundry Government extortion’ perpetrated under different branded canopies and one of such extortionist instruments regularly in use is a SIENNA car, branded: “Anambra State Government Taskforce on Fake Drugs & Control, Adulterated & Counterfeit Products”; with registration number: FKJ 268 EW.

To possibly legitimize its leadership imposition in the Market and douse the traders’ rising agitation against use of Government caretaker leadership or committee, it has come to the knowledge of Intersociety that the Government of Anambra State has fixed what looks like a kangaroo election for the Onitsha Drug Market this Feb 28, a move that has made most traders in the Market to entertain strong fears of exclusion and likelihood of being visited with an imposed and unpopular leadership in the guise of “elected leadership” using a discredited ‘electoral college’ formula. Traders in the Market spoken to by Intersociety are already poised for a showdown with the Government of Anambra State, except the election is made all-inclusive and credible.

Conditions For Acceptable Election In The Onitsha Drug Market

Intersociety clearly recalls that by the existing electoral guidelines for conduct of elections into Anambra collegiate and direct market leaderships, adopted for use by the Anambra State Central Market Association (i.e. AMATAS/ASMATA), Option A4 and 4-year tenure are in use. For instance, in the Power Tools & Allied Market direct Election of 2017, Option A4 was used. In the Electronics Market direct Election of 2018, same was used and in the Bridgehead mother Market indirect or Electoral College Election of 2019, same Option A4 was used.

In direct market leadership elections, voters are accredited from the Line Register. To ensure that, each line rep is invited during an election to call the names of his or her line’s ‘up-to-date’ members. This is done one after the other till the last line rep is invited. At the Onitsha Drug Market, membership registers are maintained by each line which also meets from time to time. In its last election of 2014, voters were accredited using same method.

In the election under demand, it is our call and insistence that same method be used or applied. This shall forestall the non-consensus among members regarding a generally binding by-law or constitution; or reported attempts by some persons with vested interests in the Market to import and impose a discredited by-law or ‘constitution’ for purpose of using same to skew and manipulate the said election and impose an unpopular leadership.

In our letter to the Anambra CP and the Director of SSS, Intersociety called on them to credibly act in aid of the Governor and the Government of Anambra State by ensuring not only adequate security during the election but also strongly and respectfully advising the duo on the need to end reckless and unpopular imposition of caretaker committees on the Onitsha Drug Market and have same replaced permanently with popularly and credibly chosen or elected leaders. During the planning and holding of the election proper, it must be ensured, too, that no bona fide trader in the Onitsha Drug Market is shut out or denied voting.

President Buhari's Speech At The ICC In The Hague, The Netherlands