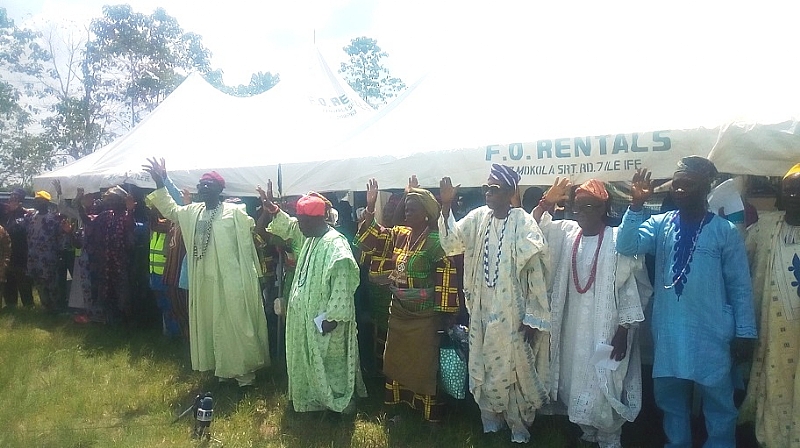 The traditional rulers, circumcisers, 21 communities in Osun State where Female Genital Mutilation was commonly practiced have vowed to stop the practice and signed a social agreement with the United Nations Children Fund that they would not go back to the practice.

Osun State was rated to have the highest prevalence rate of the practice of FGM in Nigeria, very well above the National prevalence rate, according to the Multiple Indicator Cluster Survey (MICS) 2016-17.

At a public declaration of abandonment of FGM held at the Secretariat of Ife East Local Government Area of Osun State, traditional leaders and community leaders signed a social agreement that they would not allow the practice of FGM in their communities henceforth and that they would join advocacy against it.

The Ajiroba of Abata Egba, Alhaji Badiru Akamji Adeoye, the Balogun of Wanikin, Chief Emmanuel Awoyera and the Akinrogun of Iyanfoworogi signed the social agreement of behalf of the communities and the representatives of the communities including the circumcisers made oral vow in the public that they would not practice FGM again.

A student of School of Science in Ile-Ife who witnessed the event, Miss Taiwo Omotosho Oreofeoluwa told The Nigerian Voice that she was happy that the FGM would no longer be in practice in her community and girls would be allowed to remain natural as created by God.

The United Nations Children Fund (UNICEF) described the decisions of the communities to stop FGM as a good development given the dangers in the practice to the girl child. The UNICEF FGM Consultant for Ekiti, Osun and Oyo States, Mrs Aderonke Olutayo lauded the communities for stopping FGM and warned that whoever that does it again would be arrested and prosecuted accruing to the law.

She explained that Female Genital Mutilation (FGM) is any partial or total removal of external female genitalia or any other injury of female genital organ for non-medical reason and that it is a harmful traditional practice, a gross violation of the fundamental human rights of girls and women which seriously compromises their health and psychosocial wellbeing.

In a chat with The Nigerian Voice, Olutayo said FGM is not only harmful but it is against nature as it destroys the wholesome and beautiful way women and girls are naturally created and poses increased risk of infection or prolonged bleeding, pro-longed labour, still-birth and maternal death during childbirth, saying that it also leaves lasting physical and emotional scars and an irreparable physical damage in the victims.

“FGM is a Social Norm -this means that people practice it because they believe that others in their community do it, and these people believe they ought to conform to it. At the same time, most of the reasons sustaining the practice are based on myths and preconceptions, which in turn have shaped the social expectations among the people resulting in the perpetuation of this harmful practice for generations.”

She said that as part of efforts to end the practice of FGM in Nigeria, the Phase II of a joint programme by United Nations Fund for Population (UNFPA) and UNICEF commenced in 2014 in five states including Ebonyi, Ekiti, Imo, Osun, and Oyo with the theme “Eliminating FGM: Accelerating Change”.

She added that UNICEF worked with several stakeholders particularly the National Orientation Agency (NOA) which led in mobilizing, sensitizing and educating the community members in social norm changes towards abandonment of FGM in various communities with the Focal LGAs in the State.

Olutayo said the Phase III of the UNFPA/UNICEF joint Programme on Eliminating FGM which began in January 2018 will end by December 2021 and that UNICEF will continue to use information and dialogue-based processes to empower communities and build collective actions that would lead to total elimination FGM.