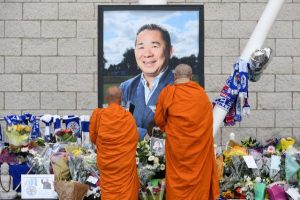 Grieving Leicester City return to Premier League action against Cardiff just a week after the shocking death of their owner while Arsenal aim to test unbeaten Liverpool’s title credentials.

A minute’s silence will be held and players will wear black armbands at all top-flight matches this weekend as a mark of respect to Leicester after Vichai Srivaddhanaprabha and four other people were killed in a helicopter crash outside the King Power Stadium following his side’s 1-1 draw with West Ham on Saturday.

The team’s midweek League Cup match against Southampton was postponed but the decision was made to go ahead with the game in south Wales.

The standout match of the weekend is at the Emirates, where in-form Arsenal host Liverpool, with Jurgen Klopp’s ominous forward line starting to click, while Manchester United face a testing trip to high-flying Bournemouth.

AFP Sports looks at what to watch out for in the Premier League this weekend:

Leicester fans plan tribute
Former Premier League champions Leicester face their first game of a new era after the death of Vichai, with fans buoyed by a pledge from vice-chairman Aiyawatt Srivaddhanaprabha that he would continue his father’s legacy.

“I will do everything I can to carry on his big vision and dreams,” said Aiyawatt, known as ‘Top’.

Cliff Ginnetta, chairman of the supporters’ club, said: “This has shaken everyone to the core. He was the boss, he was part of the fabric.”

Ginnetta said the decision to go ahead with the Cardiff match was the right one, with fans planning a 60th-minute tribute to Vichai by singing the club’s anthem “When You’re Smiling”.

“We’re pleased it’s on so we can show our appreciation,” he added. “It’s going to be hard. The players won’t need any motivation and there’ll be some tears.”

Sadio Mane is joint third in the scoring charts with six goals, one ahead of Mohamed Salah, who has hit his stride again after a fallow spell. Their dry patch has had a relatively small impact thanks to Liverpool’s defence, which has conceded just four goals in 10 matches.

“It’s unbelievable that five or six clubs have such a big number of points,” Klopp said after last week’s win against Cardiff. “It makes it only even more intense. It’s good for the people and the supporters of all the different clubs.”

Only a controversial late penalty at against Crystal Palace last weekend brought the Gunner’s impressive all-competitions winning run to an end after 11 matches.

Despite their good form, which sees them four points behind Klopp’s side, Arsenal will be keen to claim a major scalp after recovering strongly from defeat to City and Chelsea in their first two matches of the season.

Will Pochettino smile again?
Spurs boss Mauricio Pochettino is gloomy even though his side are fifth in the Premier League table with seven wins from 10 games.

Pochettino, whose side travel to newly promoted Wolves, said earlier this week that he feels the “worst” he has done as Tottenham manager despite the bright start to the season.

The new stadium is facing ongoing delays, with the club announcing that the rest of their 2018 home games will be at Wembley.

And Spurs became the first club in Premier League history not to sign anyone during the summer transfer window, even though many of their players were involved in the latter stages of the World Cup.

After Monday’s 1-0 home defeat to City, Pochettino said Spurs were not yet at City’s level.

“The gap is not big but we need to respect the gap and we still have not achieved the level of Manchester City,” he added.

Huddersfield draws at Chelsea to stay in Premier League