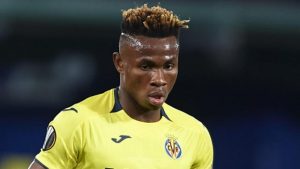 As fallout begins from Barcelona’s losses in the UEFA Champions League semifinals and Copa del Rey Final, players are being linked with moves away from the Camp Nou.

Andre Gomes, 25, already spent a year away from Barca, playing around 2000 minutes on loan to Everton this season.

The Times says that Everton would like to keep the player, but W est Ham has made a $22 million bid  for the EURO 2016 winner.

Meanwhile, Metro says that  Xherdan Shaqiri  could be one-and-done at Liverpool,  making room for another Reds’ buy .

Samuel Chukwuese is the name, and the 20-year-old Nigerian plies his trade at Villarreal.

The Yellow Submarine flirted with relegation this season, taxed by the Europa League, and Chukwuese was a bright spot. He scored seven goals and added three assists in 38 matches across all competitions.