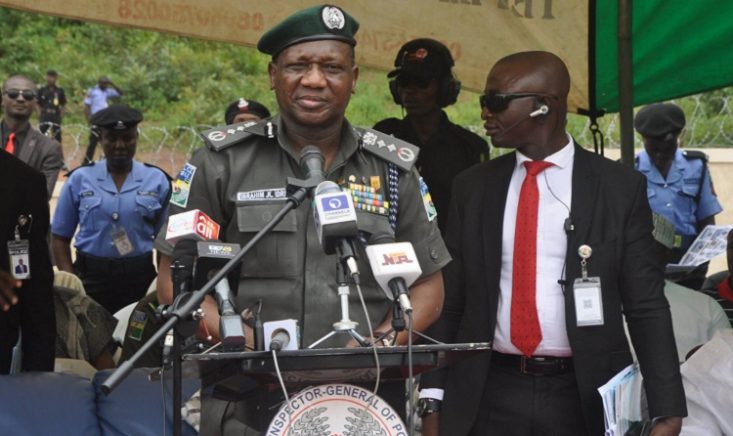 Honestly, these are interesting times in the life of our nation, a time that not only tries men's souls, but also assaults our humanity as a people because of daily happenings in our clime, but whatever be the case, the battle line for the soul of our country is drawn and there is no going back.

Just this morning, one watched a trending online video of the Inspector General of Police, Ibrahim Idris at a public function where he was portrayed as a man without intellect who kept repeating same words and line from a prepared speech.

To be candid, one was both angry and amused at the same time. Angry that how satanic can some persons and interests be, to go to any length to concoct just to bring a public officer to ridicule for whatever reason by manufacturing a doctored video of character assassination. Amused, because one can't fathom and rationalize how any sane being can believe and subscribe cheaply to the trickery of that video on the Inspector General of Police of the Federal Republic of Nigeria, what a shame.

For our collective information, the office of the Inspector General of Police (IGP) is the highest office and mirror of the Nigeria Police as an institution and whatever image is portrayed of that institution, is a reflection of our collective values and integrity as a people.

The Nigeria Police like it's counterparts all over the world, is peopled by professionals from various fields of human endeavours and it is the adequate and resourceful deployment of these experts in their areas of calling that makes the police deliver on its mandate of policing, of which public communication is key.

The public communication of the Inspector General of Police (IGP) is the responsibility of the communication or media department of the Police made up of experts and so, for any person to reason that the trending video of character assassination of the IGP is real and genuine, is not only an assault on the Nigeria Police as an institution, but also on the person's mental health which deserves to be accessed urgent psychiatric examination.

Apart from the above, the occupant of the office of the Inspector General of Police (IGP) of Nigeria, is an officer who has spent not less than three decades in the force and must have attended trainings and courses both locally and internationally to equip him or her for the office.

One stands to be corrected, no officer, I repeat, no officer as portrayed in the doctored video could have risen through the ranks to become the IGP of the Nigeria Police that one believes and it's a fact, is one of the best globally based on it's exploits locally and in international peace keeping operations, while recognizing the confronting challenges and operating environment.

For the information of the gullible and mischief makers who are hell-bent and resolved to engage in dubious means to cast aspersions on the integrity of public officials for political reasons, after repeated failures of previous concocted lies, falsehood and misinformation, this latest attempt to bring the image of the IGP to public disrepute by the character assassination video has also failed because we can see through the deceit.

Thus, one condemns in strong terms this assault on our collective intelligence which this character assassination video on the IGP represents and calls on the Police authorities to immediately investigate with a view to apprehending and prosecuting according to law, the manufacturers and their sponsors in order to serve as a deterrent to others.

Adelabu v. Seyi Makinde: Me Lords at the Court of Appeal could have done more

Tinubu: What does it mean to be a patriot?