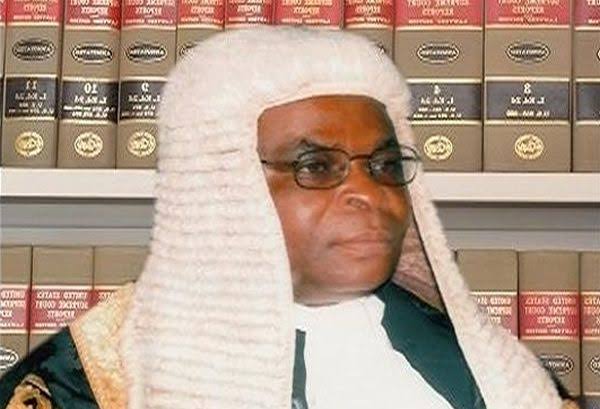 A leading pro-democracy and Non-Governmental organisation- HUMAN RIGHTS WRITERS ASSOCIATION OF NIGERIA (HURIWA) has asked President Muhammadu Buhari to end the unjust persecution of the Chief justice of Nigeria Justice Walter Samuel Nkanu Onnoghen just as the Rights group accused both the hierarchies of the Code of Conduct Tribunal; Court of Appeal and the acting CJN of being in a trinity of conspiracy to wrest the office of Chief Justice of Nigeria from Southern Nigeria to serve the ulterior motives of the Islamic segment of Northern Nigeria.

HURIWA in a statement by the National Coordinator Comrade Emmanuel Onwubiko and National media Affairs Director Miss Zainab Yusuf condemned the undue haste in the contrived trial of the CJN who was unjustly suspended by President Muhammadu Buhari over nebulous allegations by the Code of Conduct Tribunal headed by a man with alleged tainted reputation just as the Rights group wondered why the Court of Appeal has footdragged in reaching a determination on the series of appeals by the CJN and also the National Judicial Council has been choreographed to slow down the petitions against the illegally appointed Acting CJN to await the predetermined conviction of the witchunted CJN.

HURIWA in the media statement stated as follows: “It is no longer secret that the ordeal of suspended cjn is a careful woven plot to oust him from office without due process of laws by president BUHARI and gang who are afraid that justice onnoghen may as CjN not sanction their electoral heist. what is not known in the public domain is the Bauchi state connection in the entire wicked plan. The president court of appeal is from bauchi state while the chairman code of conduct tribunal is another Bauchi person . The major beneficiary from the coup, apart from President Muhammadu Buhari (PMB) ,if CJN onnoghen is ousted unceremoniously is the acting CjN, who is another Bauchi person.

The plot is to use blackmail and propaganda to oust the CjN from office after the kangaroo arraignment and midnight exparte order by Danladi Umar and where it fails, to hastily convict CjN onnoghen at all cost in the code of conduct tribunal manned by Bauchi state Danladi Umar.

A contingency second Part of the plot was made using the auspices of office of the president court of appeal, who is from Bauchi state and whose husband is APC senator-elect, to block CjN onnoghen from getting any judicial succor from the court of appeal . However, an unforeseen snag in the entire script is the weakness of the case against CjN onnoghen and his refusal to throw in the towel through resignation despite intense propaganda materials unleashed through Government machinery; but the commitment of the heavily compromised chairman Danladi Umar to the odious agenda is to the extent that he can do any thing humanly possible to help his home boy to become the substantive CjN. The speed of trial of CjN onnoghen has broken all known judicial or quasi judicial records because chairman Danladi umar is determined to convict him in three weeks time before the tenure of office of the acting CjN expires . Note that the constitution forbids any person whose tenure expires while in acting capacity from being appointed into substantive position. In this instant case, since the CjN is on suspension,a substantive CjN cannot be appointed except if CjN onnoghen is convicted at the code of conduct tribunal and finally removed by mr. President . On the other hand, the plot is not to remove justice onnoghen and put any other person other than the present acting CjN from Bauchi state. Hence Danladi umar was very angry with the media when reports emerging from the proceedings at the tribunal show clearly that CjN onnoghen is being persecuted for offenses unknown in law. The media wanted to throw spanner into the wicked plot but Danladi Umar cannot tolerate any failure emanating from that angle. Chairman Danladi umar’s hasty dismissal of no case submission by defense team of CjN onnoghen and unprecedented adjournment fo two days ( Saturday and Sunday ) interval for a definite date for the persecuted CjN to start his defense is a race against time,i.e. CjN onnoghen shall be convicted within three weeks for the operation to succeed.

In effect, justice onnoghen has been caged by judicial inquisitionists and only waiting for the hammer to fall on him for a crime he never committed but for the ambition of few desperate people love for lucre of power.

There is no doubt that the presumption of innocence and impartiality of trial as guaranteed by our constitution is no longer applicable in the charade at the code of conduct tribunal and court of appeal. Justice onnoghen’s fate has been sealed.

IT’S ONLY GOD THAT CAN HELP HIM. Nigerians must condemn this ochestrated charade”.

Unlike Wole Soyinka, other darkiesare dweebs