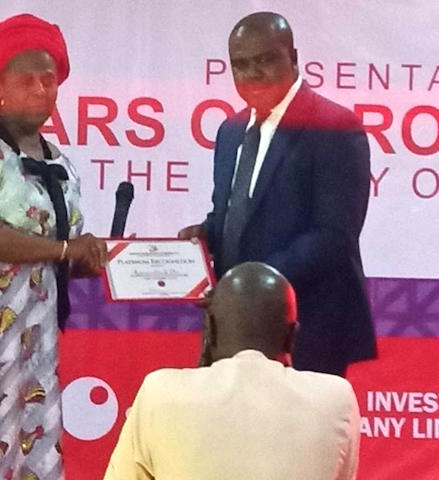 Access Bank PLC has once again cemented its position as the leading bank in Nigeria by winning the most improved bank award at the 70th Anniversary of Africa Newspaper of Nigeria (ANN), publishers of the Nigerian Tribune in the capital city of Oyo State, Ibadan.

At the event which has notable personalities from all sectors gathered at the University of Ibadan International Conference Centre to celebrate the 70th anniversary with the oldest newspaper in Nigeria.

Abdul Imoyo, Head, PR & Media Relations of Access Bank, receiving the award on behalf of the Bank, said the Bank’s leadership position to its vision of becoming Africa’s gateway to the World at large.

According to him, ”We are delighted to be honoured by the special award and we want to thank the board and management of Nigeria Tribune. The Merger gave us this award and you will agree with me that the merger between Acccess Bank and the old Diamond Bank was the fastest and the most efficient merger ever in the history of banking in Nigeria.”

“The merger today has transformed Access Bank to be the leading Bank. I must also say that the merger was informed by our corporate strategy of being Africa’s gateway to the World and that has simplified the process and everything we have achieved even after the merger, now we have more than 31 million customers and over three thousand ATMs ”.

Imoyo further stated that the achievement so far recorded by the bank is as result of the support and the trust which the Bank is getting from its customers and from media houses like the Nigerian Tribune stressing that the Bank wil do more in the coming year and will continue to grow in order to satisfying the yearnings of Nigerians.

Meanwhile the Bank recently expanded its digital lending portfolio, which gives Nigerians quick and 24/7 access to funds for emergencies without any collateral, has hit a record N1billion daily in loan value.

Access Bank’s digital loans are accessible 24hours, 7 days a week service and can be accessed via the short code *901*11#.

IG says: Senate and Saraki have hatred, contempt for me