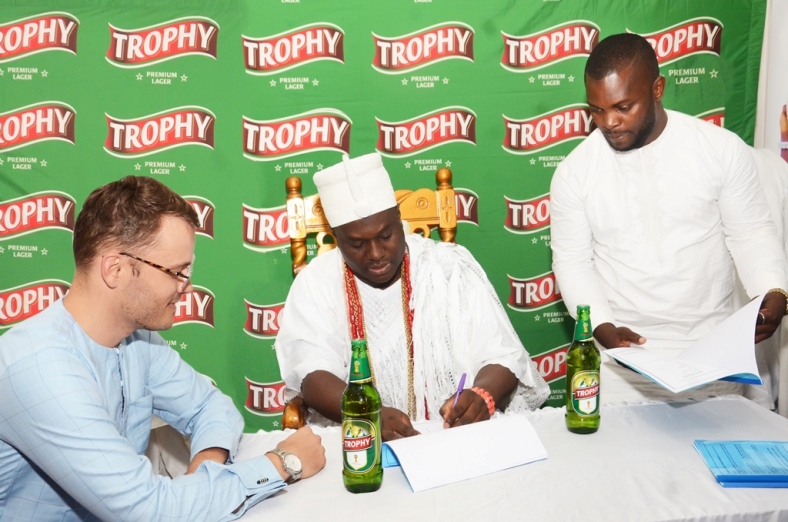 International Breweries Plc premium lager beer, Trophy has entered into a strategic partnership with The Ooni of Ife, Ooni Adeyeye Enitan Ogunwusi, Ojaja II to empower youths in Ife and its environs. This partnership which was brokered by TEOO UniversalCocepts will equip youths of Ile-Ife with empowerment tools like sewing machines and agricultural equipment for modern farming.

Speaking on the partnership, the royal father appreciated Trophy for supporting the Ojaja Fashion Training Institute and Young Farmers Club projects which are capable of boosting the economy of Ile-Ife and that of the state.

“These Corporate Social Responsibility projects are expected to empower youths in Ife and its environs with the relevant tools and capacity to make them successful entrepreneurs. Together, we will be championing the cause of young entrepreneurs at local, regional and national levels, curbing unemployment amongst the youth in Nigeria and enhancing national productivity,” the Ooni stated.

“While the beneficiaries of the Ojaja Training Institute will be sewing all the attires to be worn for the Olojo festival, the food and fruits cultivated by the youth in the Young Farmers Club will be used during the festival as well,” HRH added.

On his part, Marketing Director, International Breweries Plc, Mr. Arne Rust, said that the company is excited to be part of CSR projects geared towards empowering the Nigerian youths for a sustainable future.

“We are thrilled to partner with the community by providing all the necessary equipment and training needed for the beneficiaries of these initiatives to achieve their potential. This project is dear to our hearts not only because we are changing the stories of our children and giving them a brand new future but also because of the joy and excitement we see on their faces – this for us is all the satisfaction and reward we need,” Rust said.

In the same vein, Trophy lager beer, in its efforts to promote and sustain Nigeria’s cultural and traditional values and institutions, has joined hands with the royal fathers and natives of Osun State to make this year’s Olojo Festival a very “exciting festival”.

At the signing of the Memorandum of Understanding (MoU) between International Breweries Plc and the Ooni, which took place at his palace in Ile-Ife, on Wednesday, August 14, Rust said the company is committed to partnering with the organizers of the event, an age-old festival that continues to put Nigeria on the world tourism map.

“This partnership is consummated in the cultural ethos of the Yoruba because it is one between two historical brands: Olojo, a festival that commemorates the descent of Oduduwa to Ile-Ife and truly reflects the traditional culture of the Yoruba race and Trophy, the ‘honorable’ and most preferred beer brand in the South Western region of Nigeria,” Rust said.

“Trophy is clearly a brand that is deeply rooted in socio-cultural values and identifies with the cultural ethics of people in communities where it operates. Today’s agreement solidifies a three-year partnership as the brand supports this annual landmark event that predates the existence of mankind, signaling the establishment of mankind on earth, through the source–Ile-Ife, the land of expansion,” the Ooni stated.

Marketing Manager, Trophy lager, Funso Elubeku, revealed the brand’s plans to ensure a memorable festival experience by rewarding its loyal consumers in the town during the period.

“We are reiterating our commitment to supporting the promotion of Yoruba culture and traditions, in line with the core values and beliefs of the beer-culture, respect and honour. There will be a 15-day Trophy Lager Village where indigenes and visitors will be exposed to an unforgettable and befitting experience with lots of music, comedy, traditional performances and rewards,” Elubeku said.