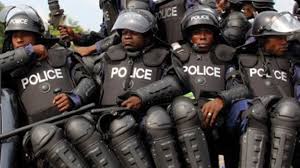 The police in Ekiti state on Monday confirmed casualties as four persons were reportedly killed during a violent robbery attack on a bank in Ijero-Ekiti in Ijero Local Government Area.

The robbers invaded the town after the normal closing hours at about few minutes to 6:00pm.

They were said to have first driven to the police station in the town where they wrecked havoc before heading straight to the first generation bank in an ambulance containing casket loaded with guns.

According to the sources, those killed included two policemen, a bank security guard and an aged man who was passing by at the time of the attack.

The robbers were said to have attacked the town’s police station where they killed the two policemen before heading to the bank for the operation.

After the robbers raided the police station and killed the two policemen on duty, the chief security guard of the bank was said to have been shot at the Automated Teller Machine (ATM) gallery of the bank.

The robbers were said to have entered Ijero Ekiti through Aramoko Ekiti Road in an ambulance with a casket with all sort of weapons.

They were said to have announced their arrival with gun shots which sent residents scampering for safety.

The bandits reportedly blew the bank’s security door with dynamite to gain access into the banking hall.

They were said to have also made away with unspecified amount of money during the raid which was said to have lasted for about an hour.

The heavy shooting by the robbers paralysed transportation, economic and social activities in the town.

Confirming the incident, the Police Public Relations Officer of the state, DSP Caleb Ikechukwu said he has visited the town to gather information, saying the robbers arrived the town few minutes after 5:30pm.

“There was indeed casualty, the robbers arrived the town few minutes after 5:30pm, they succeeded by using dynamite to gain access into the banking hall.

Chelsea may lose place to Zappacosta in Chelsea match against Arsenal

8 thoughts on “Two Police Officers, Others Killed By Armed Robbers In Ekiti State”