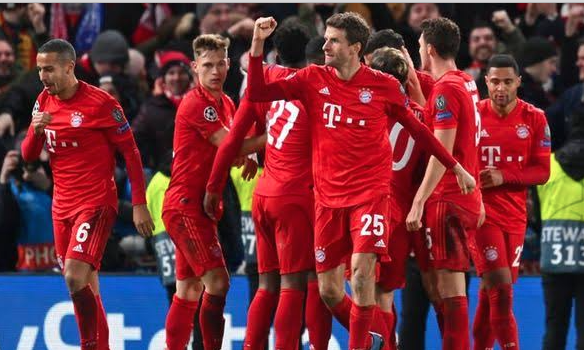 Frank Lampard started with the same team that defeated Tottenham but with a different formation with Ross Barkley and Reece James on the flanks while Olivier Giroud started in place of Tammy Abraham.

Thomas Muller gave Chelsea a taste of what to expect in the first minute when his low drive effort tested Willy Caballero.

Chelsea had chances of their own but not as much as Bayern Munich who where denied by Caballero.

The first half ended 0-0, but Bayern Munich came out in the second half in a devastating and ruthless form.

Robert Lewandoski put the icing on the cake with a routine finish to ensure Bayern leave London with a massive advantage over Chelsea.

Marcus Alonso was sent off for Chelsea, while Jorginho will also miss the second leg in Munich

Frank Lampard admitted that there was a gulf in class between both sides in an interview with BT Sport after the match.

“The performance was poor and sometimes you have to be brutally honest.

They outclassed us in every department and it’s quite sobering. The level of team they are is why they challenge in the Bundesliga and Europe year in year out.

I’m disappointed we couldn’t do more against them. We have to take it on the chin and work towards getting back to the levels we want to be at.

“If you look at the choice of passes they make, our choices have to improve. If our players have a bit about them, which I think they do, they will look at who they were playing against and the level they need to work to.

Barcelona and Napoli played out a 1-1 draw in Naples, Dries Mertens gave the hosts the lead in the first half before Antoine Griezmann restored parity for Barcelona in the second half.

Arturo Vidal was sent off in the closing moments of the match.

soccer star Ronaldinho says: "It’s a lie. I won’t marry my two fiancees at once",