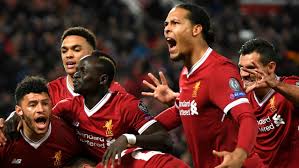 Liverpool defeated Manchester City 3-0 in the first leg of their Uefa Champions League Tie at Anfield.

The game started on a cagey note for both sides as they try to make use of the spaces that Guardiola spoke about in his pre-match conference.

Salah scored his 7th goal in the Uefa Champions League when City defenders failed to clear the ball.

Manchester City tried to respond, but Liverpool didn’t allow them, the reds were compact in the middle of the park.

Chamberlain scored a stunner in the 20th minute as City midfielders failed to spot the danger posed by the former Arsenal winger.

Saidu Mane put the icing on the cake by placing a glancing header pass Ederson to give Liverpool a 3-0 lead in the first half.

City came out with a point to prove in the second half as they dominated possession but they couldn’t find a way pass the Liverpool defense led by Virgil Van Dijk.

Mohammed Salah hobbled off on the half hour mark, but Liverpool held to the win as Manchester City failed to direct a shot on target for the first time since 2016.

Meanwhile, Barcelona beat Roma 4-1 at the Camp Nou stadium as they move a step closer to the last four of the competition.

Roma Midfielder, De Rossi diverted into his own net when he attempted to clear Iniesta’s tame effort to give Barcelona a 1-0 lead at the end of the first forty five minutes.

Manolas scored another own goal to double Barcelona’s lead before Pique and Suarez completed the rout.

'Nigeria have lot of work to do before World Cup', Gernot Rohr says after England loss

9 thoughts on “UCL: Big Win for Liverpool and Barcelona”