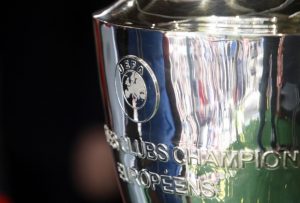 The UEFA Champions League Round of 16 ties were drawn today, and there are some spicy clashes on the menu.

With the likes of Liverpool, Atletico Madrid and Manchester United having finished the group phase in second spot, the draw has produced some games worthy of a final.

Defending champions Real have been drawn against Ajax Amsterdam, while Liverpool and Bayern Munich meet in another high-profile clash.

United got Paris Saint-Germain, who scored the most goals during the group stage, while Juventus will meet Atletico Madrid.

Here are all the Last 16 fixtures:
FC Schalke 04 vs Manchester City
Atletico Madrid vs Juventus
Manchester United vs Paris Saint-Germain
Tottenham Hotspur vs Borussia Dortmund
Olympique Lyon vs FC Barcelona
AS Roma vs FC Porto
Ajax Amsterdam vs Real Madrid
Liverpool vs Bayern Munich
The first legs will take place on 12/13 and 19/20 February, with the return fixtures set to be played on 5/6 and 12/13 March.

Paul Pogba: Manchester United are now playing as they should do – offensively