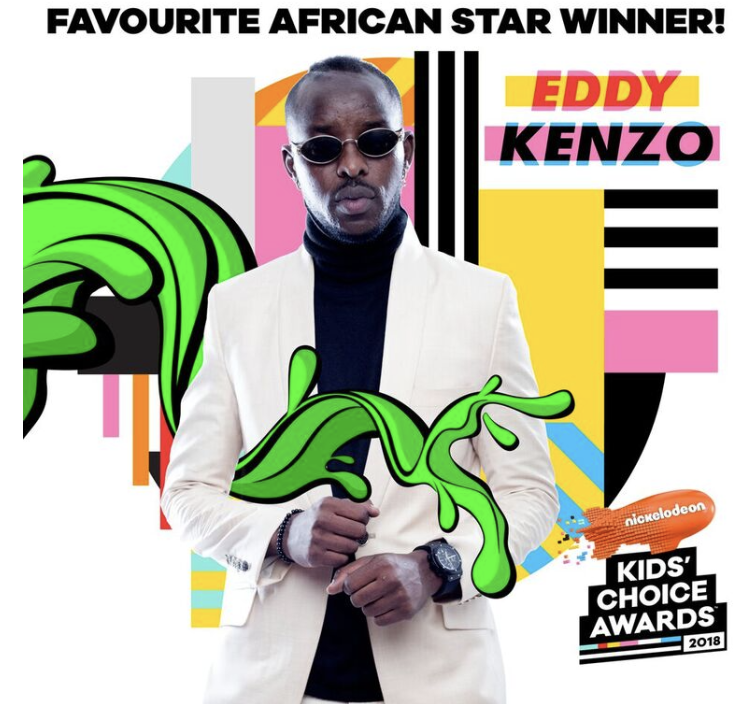 Eddy Kenzo was chosen as the winner amongst some of Africaa��s most talented artists, athletes and entertainers: Davido and Emmanuella (Nigeria) Cassper Nyovest and Caster Semenya (South Africa) and Diamond Platnumz (Tanzania) while BTS (Asia) received the title of Favourite Global Music Star, a category in which globally famed South African DJ, Black Coffee, was nominated.

Commenting on this yeara��s winners, Executive Vice President and Managing Director Viacom International Media Networks Africa (VIMN Africa), Alex Okosi, said: a�?At VIMN Africa we are committed to creating opportunities that showcase and celebrate African culture and talent across our channel brands (Nickelodeon, MTV, MTV Base, BET and Comedy Central) both in Africa and around the world. We are proud of all the African nominees at Nickelodeona��s 2018 Kidsa�� Choice Awards who continue to shine a light on the continent.a�?

Favourite African Star winner, Eddy Kenzo said : a�?There are no words I can use to express my gratitude and happiness for winning the Nickelodeon 2018 Kids’ Choice Award, it’s a great day for us at Big Talent Records and we are glad to be part of the Nickelodeon Family. Huge thanks to all of our fans all over the world. GOD IS GREAT. Thank you Nickelodeon, 2018 will always be remembered as #AfricaToTheWorld. God bless the kids worldwide.a�?

Hosted by WWE Superstar John Cena, the unpredictable mess-fest was broadcasted live from the Forum in Inglewood, California, where kids celebrated the best of everything they love in pop culture.

Also Commenting on this yeara��s winners, Channel Director for Nickelodeon for Viacom International Media Networks (VIMN) Africa, Tasania Parsadh said : a�?We are exhilarated for performing star Eddy Kenzo for winning the Favourite African Star award, as voted for by the kids, his accomplishment is a first for Uganda from the Nickelodeon Kidsa�� Choice Awardswhich is incredible. Nickelodeon is proud of all the nominees, who rallied with their fans through the nomination processa�?.

This yeara��s show put the power of choice in the hands of kids at home with an interactive digital experience. Kids had the opportunity to choose what happens live during the show by casting votes to determine the outcome of multiple stunts including: Black-ish star Marsai Martin wearing a�?Guac Socksa�? in a game of a�?Eat It or Wear It,a�? and social media stars Alex Wassabi and LaurDIY taking on the a�?Fear Boxa�? challenge.

If I had my way, I will do Small Simple weddinga��Banky W

As Christians you Need a Prophet in Your Lifea��Actress, Eucharia Anunobi