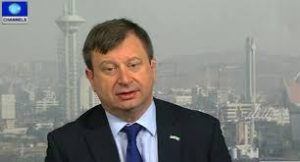 Ahead of Saturday’s governorship election in Ekiti State, the British government Monday advised the Independent National Electoral Commission (INEC) and political parties to ensure that the exercise was free, fair and credible.

The British intervention came through its High Commissioner to Nigeria, Mr. Paul Arkwright, who spoke to journalists in Abuja shortly after meeting with the National Chairman of the All Progressives Congress (APC), Mr. Adams Oshiomhole.

His host, Oshiomhole, who also spoke during the visit, expressed his party’s preference for the deployment of the military in the state during the election to help check violence and assure voters of their safety.

The British High Commissioner said that his country was interested in seeing that the people of Ekiti State were allowed to freely express their opinion, to vote in line with their conscience.

He said Britain was interested in Nigeria’s democracy, adding that the UK Mission would send observers for the election, to ensure it was free and fair.

“The British High Commission will be sending a team there to observe the election and to ensure that they go smoothly; to ensure that INEC can do its job; that the security forces do their job and basically to ensure that the people of Ekiti State are allowed to freely express their opinion, to vote along with their conscience and to be able to do so in peaceful manner,” Arkwright said.

Commenting on the move by the Nigerian Police Force to deploy about 30,000 officers with additional 19,000 men by the Nigeria Security and Civil Defence Corps (NSCDC), Oshiomhole said no one should lose sleep, since the security forces would only be in Ekiti to maintain peace.

Oshiomhole, who reacted to the outrage over the deployment of 30,000 police officers for the election, said that it was not the number that mattered but the effectiveness of the force in ensuring the safety of voters and ballot boxes.

According to him, “Whether they use the military or not, I don’t think you want to argue that. Over the years, since 1999 to 2003, the armed forces have always been deployed; don’t forget when I was in Edo State, I told people that I want the armed forces to be involved in the election because the rigging machine is serviced by criminals who are hardened and who are often hired.

”Now if you have criminals wielding AK 47 on an election day, and the police is overwhelmed you want to say the army should not be deployed? We shouldn’t worry about who we deploy; I think we should all pray that however people are deployed that in the end we are not counting dead bodies.”

He added that the important thing is that regardless of what the police choose to do and the number they choose to deploy, it will ensure that those who are going to vote are safe and that the votes cast are secure.

While commending the British High Commissioner for the visit, he assured him that he would do everything to ensure a free and fair process in the Ekiti governorship election.

“The process is more important than the outcome because we are looking at the Nigeria project, in terms of sustaining democracy, not the survival of a particular political aspirant, whether it is on my party platform or in the platform of the opposition,” he said.-Thisday

9 thoughts on “UK Warns against Rigging of Ekiti Governorship Election”