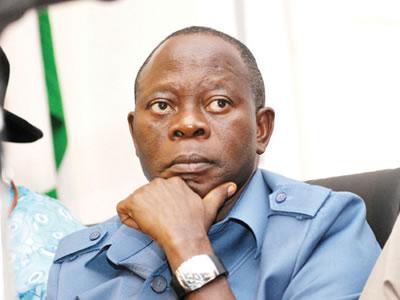 The Commissioner for Information, Delta State, Mr Patrick Ukah, has rebuked the immediate past governor of Edo State and leader of the All Progressives Congress (APC) in the state, Comrade Adams Oshiomhole, over his comments on Delta State.

The former Governor had at a mega rally of the party in Benin City, the Edo State capital, on Friday declared that his party would extend its coast in the South-south by installing an APC governor in Delta State come 2019.

Mr. Ukah, who responded to the bragging of Oshiomhole, in a statement said the choice of words, especially the use of a�?by installinga�?, by the former labour leader was a manifestation of his limited knowledge of politics as against unionism were he claimed to be a master.

The statement which was signed by the Media Assistant to the Commissioner, Mr Sam Ijeh, in Asaba on Saturday, Ukah, expressed shock that Comrade Oshiomhole, who is a leader of a party that has brought untold hardship to Nigerians, could boast of a�?installing a Governora�? in a state where he has no grip, advising him (Oshiomhole) to suggest ways for the Federal Government on how to make living bearable for Nigerians.

Mr. Ukah posited that with the numerous developmental projects going on in various parts of the state, Deltans are satisfied with the performance of the present administration and this was made manifest by the resounding victory recorded by the Peoples’ Democratic Party (PDP) in the recently conducted local government election in Delta State.

The Commissioner for Information advised the former Governor to first join hands with others in his party to put their house in order by conducting a successful national convention that is long overdue instead of engaging in a wild goose chase.

He said that Comrade Oshiomhole should not be deceived by fair-weather politicians who are leaving the PDP for the APC, describing them as spent forces who feel uncomfortable with the reforms presently going on in the PDP.

Mr. Ukah said Delta was in safe hands under the leadership of Senator (Dr) Ifeanyi Okowa, adding that those who would attempt to flex muscles with the Governor would be denounced and disgraced by the people.

He said the likes of Comrade Oshiomole were responsible for putting Nigeria in comatose state thereby taking the country that was on steady growth, several steps backward.

The propaganda used to deceive Nigerians into voting APC into power and now regretting their actions would not fly in Delta State, the Commissioner for Information said.

PDP To Buhari: Prove Your Anti-Corruption Fight With Oshiomhole’s Case

Atiku the only presidential hopefulcapable of unseating Buhari in 2019- group