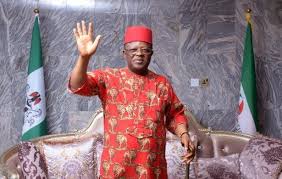 All is now set for the mega rally heralding the kickoff of the governorship campaign of Governor David Umah, the Peoples Democratic Party, PDP Flag bearer in the March 2nd governorship election in Ebonyi State.

Uzor said the choice of Ikwo local government as the place for the kick –off was informed by Governor Umahi’s regards for the people of the area, adding that Ikwo council area was the first local government within the Ebonyi central senatorial zone that supported his campaign in the last 2015 governorship election. He said all market women, political heavyweights as well as students are expected to attend the mega rally from all the wards and local government areas of the state as a demonstration of the undying love and belief in the character of Governor Umahi who has turned around the story of Ebonyi state, the hitherto ‘backwater’

Part of the statement read “Today being Friday, the Divine Mandate Campaign Organization, the platform with which Governor Umahi was elected will hold a mother or all rallies in Ikwo local government area. This is in addition to the demonstration of visible infrastructural and human resources development which the people of the local government enjoy today which had eluded them even in the last administration with their own son on the saddle”

Also reacting to the statement credited to the embattled governorship candidate of the All Progressives Congress, APC, Senator Sonni Ogbuorji that the distribution of 70 vehicles by the state government to security agencies was a bribe, Uzor said the statement had further vindicated his stand that the APC candidate is not in tune with reality and what good governance entails.

He said such careless statement from a man seeking public trust to become governor to descend so low to question the donation of vehicles to security agencies to safeguard the lives and property of the public shows that he lacks knowledge of responsibility in governance. “We saw the statement credited to Senator Ogbuorji campaign Organization describing the distribution of vehicles to security agencies in the state as bribe as not only embarrassing but smacks of a people who have lost touch of reality and those who have been clinically defeated by their won idiosyncrasies. The primary aim of every well meaning government should be security and when somebody who is seeking your mandate has shown apathy on security of lives and property as portrayed by Ogbuorji, then, there is serious problem.

“Every security conscious government knows that for effective security, there should be a synergy between the federal government and state as represented by the security agencies. In the area of the synergy, governments often times give as helping hands, logistics which includes but not limited to vehicles and other things to security agencies to enhance their operational proficiency. That is what Ogbuorji is questioning.

Uzor further disclosed that Ogbuorji kicked against the distribution of the vehicles to security agencies because he saw that he has lost the election and has lost his contact within police headquarters where he boasted of removing every police Commissioner posted to the state who is not ready to work with him and his party to rig the governorship election.

He fired back on the statement from the same APC camp accusing Umahi of double standard as regards the Operation Python Dance III, adding that they lack information about the workings of government and therefore are always caught in their own web of trying to misinform the public.

He said Governor Umahi who officially and personally flagged off the Operation Python Dance III at the Military Cantonment, Nkwagu couldn’t have been said to be against the exercise, rather, the Governor as the Chairman of the South East Governors’ Forum warned the Army to be professional in their engagements. Ends

Suspending Rochas is not the best – Barr Chima Anozie