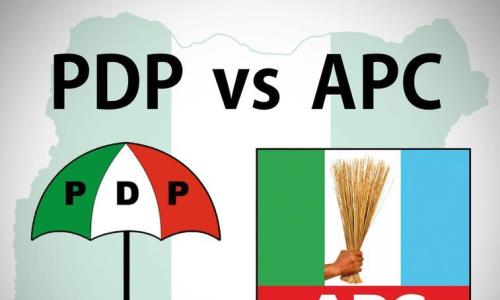 In what looked like mockery of Ebonyi state chapter of the All Progressives Congress (APC), Governor David Umahi says he will lend 2000 members of his party, the Peoples Democratic Party (PDP) to APC to enable the party receive President Muhammadu Buhari who is billed to visit the State on Wednesday next week to canvass for votes ahead of the February 16th presidential election.

Umahi who made this known at Ugbodo, the council headquarters of Ebonyi Local Government Area when his reelection campaign train visited the LGA on Friday, explained that it would be embarrassing for the president to come to the state without people to receive him since the people still in APC in the state were no longer more than 1000.

He said the gesture was to show the president the necessary courtesy so that he won't come to Ebonyi and found no people to receive him.

He also announced that PDP would shift its rally to the three Senatorial zones to allow Mr President use the state township stadium now known as Pa Ngele Oruta township stadium.

The governor said he has identified the 2000 persons that would be at the stadium to recieve the President and urged the PDP members not to feel bad about it.

“On Wednesday, Mr. President is coming to Ebonyi, we shall accord him all necessary courstesy as a President and our friend. To honour him, we will shift our rallies to three Senatorial zones to do our rallies and allow them stadium to use”

“I will take permission from you. You know, these people: the reminants of the house of Saul, in totality, they are not up to 1000. So, I am going to borrow them some people. Pls, don't say no. Just for people to be at the stadium.

He said: “I am going to rule you. The people you will see there are going to be PDP members but they are not going to be more than 2000 to recieved the President.

“This is to honour the president. So, whoever you see there, just know that they are PDP members.We will not allow the president to come here without our people recieving him.

“We will go ahead with our own rallies in the three geopolitical zones. We have identified the people that people that will go there. So, if you see your people there don't be angry.

“I am also going to help them with buses to bring people from Enugu and Abia states to make our state tick”.

The governor also appealed to the people to vote the PDP presidential candidate, Alhaji Atiku Abubakar and his running mate, Peter Obi and all other PDP candidates in the upcoming general elections in the state.

Umahi also flagged off the remaining 16km Nwiboko Obodo and announced that construction would commence on Monday.