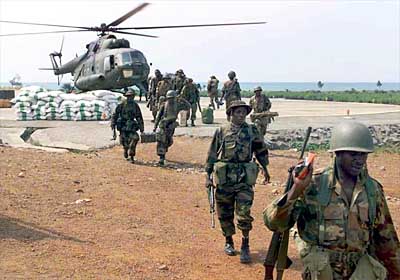 ‎In the most recent times, we have had to welcome diverse operations from ‘Operation Lafiya Dole’ meaning ‘Operation peace by force’, ‘Operation Harbin Kunama’ meaning ‘Operation Scorpion Sting’ to Operation Egwu Eke, which translates into ‘operation Python Dance’, etc, all out to address issues that affect the general well-being of the Nigerian society.

The Nigerian situation between 1999 till date when the military eventually returned to the Barracks shall remain a reference point in years to come and students of contemporary history will have a lot to up their sleeves.

Though it has been argued that, handling the problems related to domestic violence and internal security is the basic function of the police, along with maintenance of law-and-order. However, experience overtime has shown that the police are found ill-equipped and ill-trained to handle the situations for which these police organisations are formed! Thus, calling in the military becomes the only available option

Armed groups usually spring up in unconventional ways to challenge the very existence of the state and thus, Such as well from time to time has called for deployment of troops to the street. The recent case of the Nigerian military deploying its personnel to some parts of the country is something that has been viewed with mixed feelings, arguments, counter arguments and reactions.

Addressing such, one may therefore, need to look at what has made these operations necessary and perhaps look into what they are and if they have been able to deliver to the People.

Looking at‎ it holistically, it is imperative to note that the ‎military is a force authorised to use lethal or deadly force and weapons to support the interests of the state and ‘some’ or all of its citizens. The emphasis on ‘some’ is that there are times, just like in the Nigerian example and as seen elsewhere that citizens turned out laws, pick up arms against the state and in this kind of unfortunate scenario, the military may have no option but to protect the interests of law abiding citizens only.

The military typically consists of an Army, Navy, Air Force, and in certain countries the Marines and Coast Guard. The task of the military is usually defined as defence of the state, and its citizens, and the prosecution of war against another state. The military may also have additional manifest and latent functions within a society, including, the promotion of a political agenda,as recently seen in Zimbabwe, protecting corporate economic interests, internal population control, construction, emergency services, social ceremonies, and guarding important areas and state assets.

The military may also function as a discrete sub culture within a larger civil society, through the development of separate infrastructures, which may include housing, schools, utilities, logistics, health and medical, as recently seen in the medical outreach by the soldiers in the ‘Operation Egwu Eke’, in the south east and some parts of the south South, law, food production, finance and banking. In broad usage, the terms “armed forces” and “military” are often treated as synonymous, although in technical usage a distinction is sometimes made in which a country’s armed forces may include both its military and other paramilitary forces. Armed force is the use of armed forces to achieve political objectives.

For much of military history, particularly In a democracy or other systems, the relationship between the military and the state it serves is a complicated and ever-evolving one. Much depends on the nature of the society itself, and whether it sees the military as important, as for example in time of threat or war, or a burdensome expense typified by defence cuts in time of peace. Nigeria has learnt it’s lessons. Those living in the terror ravaged north-eastern Nigeria knows better and sees the military as an emblem of salvation. One difficult matter in the relation between military and society is control and transparency. In some countries, limited information on military operations and budgeting is accessible for the public, hence the bruhaha when a military operation is launched to quell or handle palpable threats.

‎Since the emergence of president Muhammadu Buhari, a retired military General in May 2015, the Nigerian military has carried out myriad of operations under various code names in a bid to continue to safeguard the state from inimical threats within, but now, they have more benefits as the state offers the opportunity of getting educated at an online university for military for all the soldiers.

Operation Lafiya Dole which literally translates to ‘Peace by all means’ in Hausa. Is the military code name for the war on terror in Nigeria’s northeast. It was launched by Chief of Army Staff, Lieutenant General Tukur Buratai in July 2015 as a replacement for “Operation Zaman Lafiya” which implies, ‘Let’s live in peace’. There was also, Operation Sharan Daji, which was launched in July 2015 to stem the tides of cattle and other livestock rustling and armed banditry in the Nigerian Northwest region and the Operation Awatse: Launched in the Southwest to tackle militants and oil installation vandals around the Arepo, Ishawo and Elepete creeks in Lagos and Ogun States. Operation Awatse was implemented by a combined team from the Air force and Navy with plenty of support from army boots on the ground.

Then came the Operation Shirin Harbi’ Launched in 2015 to combat the crisis in Bauchi and Gombe States. Shirin Harbi was also useful as the military sought to rein in the killers in Southern Kaduna, and then, Harbin Kunama I, which was the military’s intervention and response to cattle rustling and armed banditry in the Forest of Zamfara and environs. Harbin Kunama literally means sting of a Scorpion” also launched in 2015, in northwest nigeria.

Crocodile Smile I, which was a South-South operation flagged off in August 2015, was targeted towards improving operational effectiveness in the creeks and halt the destructive activities of oil thieves and militants in the Niger Delta region, sabotaging and crippling Nigeria’s oil installations.

One of the most talked about Ops of the Nigerian military is the Operation Python Dance, in Nigeria’s south East, which initially was to check the rising tides of robberies, kidnapping and cultism in and around Anambra, until the military deemed it strategically fit to float the Operation Egwu Eke II, the famous Python Dance II. This operation which was specifically aimed at checking and halting the secessionist agitation in Southeast Nigeria.

The Nigerian military has in all these operations mentioned above, performed very well and professionally too. The military often function as societies within societies, by having their own military communities, economies, education, medicine, and other aspects of a functioning civilian society.‎ The militarist argument asserts that a civilian population is dependent upon, and thereby subservient to the needs and goals of its military for continued independence. .‎

Every nation had different needs for internal military operations . How these needs are determined forms the basis of their composition, deployment, rules of engagement, equipment, and use of facilities. It also determines what military does in terms of peacetime, and wartime activities. All military forces, whether large or small, are military organisations that have official state, and world recognition as such.‎

The military, generally comprising of soldiers, Navy and airmen, are capable of executing the many specialised operational missions and tasks required for the military to execute policy directives. Just as in the commercial enterprises where there are, in a corporate setting, directors, managers and various staff that carry out the business of the day as part of business operations or undertake business project management, the military also has its routines and projects. During peacetime, when military personnel are mostly employed in garrisons or permanent military facilities, they mostly conduct administrative tasks, training and education activities, and technology maintenance. Another role of military personnel is to ensure a continuous replacement of departing servicemen and women through military recruitment, and the maintenance of a military reserve. ‎

‎It is evident that the Nigerian military in a bid to safeguard the state and it’s territorial integrity has conducted a number of operations in response to a developing situations. These operations are designed as a military plan to resolve the situation in the state’s favour.‎

Threats to internal stability often turnout the greatest threats to national security. Having experienced a number of regional separatist struggles, and instability created by radical religious / political movements, it is understandable that the Nigerian Governments may have little tolerance for public disorder! Fulfilling the National Security function thus entails adapting capabilities in order to contribute to the collective management of regional and global security challenges. Hence, the need for military operations.

More than the external threats, the enemies from with-in Nigeria, have demanded the pro-active deployment of armed forces to maintain law-and-order, and, to maintain sovereignty and integrity of the nation in the face of serious threats of national disintegration!‎

All armed forces have both domestic and international responsibilities‎is. This we have seen via different operations in different parts of the country.

It is very clear that Nigeria as a country has firmly resolved to fight the rising tide of separatist movements and has shown willpower to maintain ‘law-and-order’ all over the nation so that every citizen gets equal opportunity of development and progress. These efforts need support from all the quarters and in all forms. It is constitutional responsibility of the armed forces to deal effectively with the internal threats emanating from various sources eroding the nation’s strength and will power beside the territorial integrity.

Hence the big guns and tanks are sometimes needed to safeguard the state from enemies of humanity. Those who threaten the state do so also to humanity and it’s the responsibly of every nation to protect its own. This is the reason why Laws are also dynamic to protect those who protect us.

In the Nigerian scenario, the military has done well.‎ Like Winston Churchill once said, ‘We sleep safely at night because rough men stand ready to visit violence on those who would harm us’.

6 thoughts on “Understanding Military Operations as Safeguard of State”