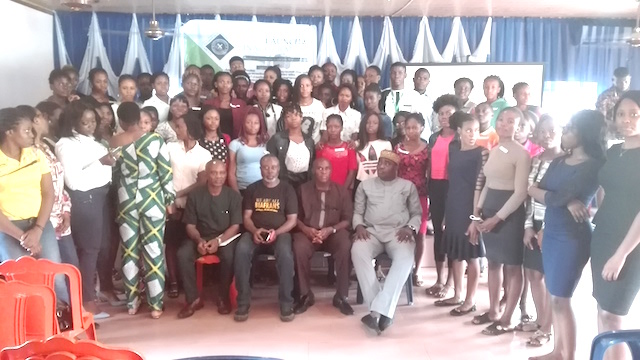 It was indeed a moment of professional orientation, tutelage and career rekindling, as the National Union of Campus Journalists, Unizik Chapter got inaugurated in Awka, Anambra State.

Inaugurating the union, the State’s Commissioner for Information and Public Enlightenment, Hon. C-Don Adinuba described journalism as a very important profession in every society, owing to its enormous roles of informing, engaging, educating, enlightening, mobilizing and entertaining the people, all with the aim of making the society a better place to live.

Hon. Adinuba, who was represented by the MD/CEO of Anambra Newspapers and Printing Corporation — publishers of National Light Newspaper, Ka Ọ Dị Taa Igbo Newspaper and Spotlight Xtra — Sir Chuka Nnabuife reminded the Young Journalists that anyone who must practice journalism must do that in line with principle of objectivity and the ethics guiding the profession, so as to be the change maker and problem solver a Journalist is meant to be in the society, rather than being part of the problem to be solved, especially by way of stirring up societal unrest.

Also speaking, the Director of Unizik 94.1 FM and immediate past Dean of Social Science Faculty in the University, Prof. Stella Okunna charged the participants to always verify their news before disseminating, as Journalists, owing to the fact that they are the only people the masses depend on for reliable information; as, according to her, fake news has a chain of effects on the audience and the society at large.

Defining fake news as a news story which the writer or disseminator knows to be untrue, but still disseminates it in order to deceive or mislead others; the first female Professor of Mass Communication in Nigeria frown at Journalists who do such things, which she described as unethical and unprofessional, even as she urged the burgeoning Journalists never to trial that paths.

On his own part, the MD/CEO of Anambra Broadcasting Service, Chief Uche Nworah who lectured the participants on Introduction To Journalism charged them to have strong zeal and passion for the profession, rather than channel their attention towards money.

He highlighted certain relevant skills required of anyone who practices journalism, to include basic communication and writing skills, ICT skill, networking skill, multi-tasking skill among others, and further exposed them to the various opportunities that abound in the field.

Others who delivered lectures at the interactive event, including the Secretary General of NUJ in Anambra State, Mr. Emmanuel Udeagha; Coordinator of the African Centre for Media and Information Literacy (AFRICMIL), Mr. Chido Onumah; the Program Manager, Premium Times Center For Investigative Journalism, Mr. Adedeji Adekunle, and former NUJ Treasurer, Mrs. Monique Okechukwu, among others, dosed out to the participants, the various tips that will enable them become eminent Journalists and excel outstandingly in the prestigious field of journalism.

In their vote of thanks and closing remarks respectively, the President of the union in the school, Mr. Dimson Emmanuel, and the Editor-in-Chief of the union’s publications, Miss Chiamaka Okafor eulogized those who contributed in diverse ways towards the success of the fecund event, especially the organizing team and the guest lecturers, even as they charged the participants to put in consummate practice, all they were taught, as according to them, that alone can make them to be outstanding and eminent in the profession.

Appreciating the organizers, a participant at the event, and

100-level student of Mass Communication, Ms Peculiar Okemsinachi said “..they did a great job in seeing that the program went pretty well, coupled with the knowledgeable guests we had, who made the event a memorable one indeed; this is indeed a work well done”

Among others, highpoints of the event included cutting of the inauguration cake, questions and answers sessions, networking among the participants and the guests, as well as the “Show, Don’t Tell” practical writing session.

10 thoughts on “Union of Campus Journalists Inaugurated In Awka”