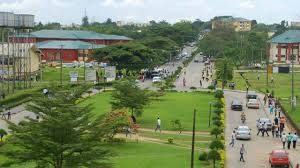 Scores of students of Nnamdi Azikiwe University, Awka, Anambra State on Monday took to the streets to protest the death of a final year student of microbiology, Francis Madubuobi, who slumped and died on Saturday while playing basketball.

The protesting students claimed that the medical personnel at the university’s medical centre did not do enough to save the life of Francis when he was taken there .

But the Director of Information of the university, Dr. Emmanuel Ojukwu, said the deceased was brought in “without a pulse.”

A student who spoke on condition of anonymity said he was among those that rushed the deceased to the medical centre, and alleged that the personnel at the centre asked them to pray for him, instead of treating the victim.

But another student said, “I was inside the ambulance holding Francis’ foot. It was damn cold; his eyes were open. I was scared. I knew only a miracle could save him since he had no pulse.

“On getting to Amaku, the doctors saw that it was already too late.

“The events leading to his (Francis) death was extremely worrisome to students of this institution, as it could happen to any one of us or our close friend,” he argued.

They said it was the second time that a student had died in similar circumstances at the university’s medical centre.

The students vowed to continue the protest until the management of the university address the situation and make commitment to the issue.

But in a press statement made available to newsmen in Awka, the management of the university insisted that the student had died before he was brought to the university’s clinic.

The statement read, “The management of Nnamdi Azikiwe University, Awka, has received with great shock the painful and sudden demise of one of our students, Francis Chinedu Madubuobi, a 400 Level student of the Department of Applied Microbiology and Brewing.

“The deceased slumped while playing basketball with friends on Saturday, July 21, 2018.

“The deceased was quickly rushed to the university medical centre, but he had no pulse upon examination.

“This means that he had died before being brought to the University Medical Centre.”