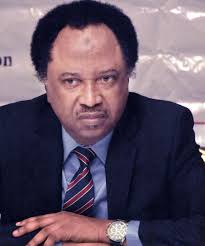 Senator Shehu Sani made a name for himself as a human rights activist in the 1990’s especially during the heady days of the June 12 annulment crisis. The June 12 1993 elections was presumably won by business mogul and politician, Chief Moshood Kashimawo Olawale Abiola before it was annulled with the stroke of the pen by General Ibrahim Badamosi Babangida that same year which forced him to step aside from office when the heat became too much.

Sani, despite being a northerner like IBB boldly took up the gauntlet and spoke ferociously against the annulment which cost so many Nigerian lives as the security forces murdered many peaceful protesters especially on the streets of Lagos.

He wasn’t just about June 12 as he criticized many societal ills and bad governance and had a robust audience in the local and international media where he regularly aired his views and subsequently became the media’s darling.

Democracy returned to the country after a sixteen year military hiatus in 1999 and he immediately became an unofficial watchdog of the activities of the politicians who tragically continued the tradition of bad governance which the military junta was known for. He bared his fangs boldly and suffered the backlash as a result.

He decided to walk the talk in 2015 by contesting the Kaduna central senatorial district elections under the banner of the All Progressives Congress (APC) and won resoundingly. He was very vocal in the eight senate and sponsored many progressive bills for the betterment of his country. He was the one who blew the whistle that his colleagues were receiving the whooping sum of thirteen million naira as running costs every month.

He fell out with his state governor, Mallam Nasir El-Rufai and blocked the request of the latter to obtain a loan from the senate on the floor of the red chambers. He attacked the governor for his perceived ineptitude and was a thorn in his flesh so much so that he had to defect from the APC in the run up to the 2019 elections where he lost his bid to return to the nation’s highest legislative body.

Upon leaving the senate, he became a constant critic of the Buhari administration picking holes in the dictatorial tendencies of it as well as the general bad governance. Despite being a northerner like the President, he didn’t allow tribal sentiments to get in the way of his regular constructive criticisms of his administration as he is a completely detribalized Nigerian.

Nigerians woke up to the recent news of his being arrested during the yuletide period for allegedly extorting $10,000 from a car dealer who wanted to have an audience with the Economic and Financial Crimes Commission Chairman (EFCC), Ibrahim Magu through his influence.

This allegation is rather funny as Sani who has been in the public space for decades especially with his recent stint in the senate are certainly not an impoverished man. $10,000 is a piddling for a man of his calibre and it is strange that he would put his hard earned reputation on the line for the sake of it.

Another issue that arises is that what is the proof that he is even close to Magu? Many of the supporters of the acting EFCC boss blame the outspoken activist for being among the senators that blocked the nomination of the latter so how could he suddenly facilitate a soft landing for the car dealer? We live in strange times indeed.

Another question begging for an answer is will Magu have stooped so low as to be sharing a mere $10,000 with Sani? This is a man who chases billionaires denominated in foreign currencies and his bribery terms will certainly run into millions of dollars. The allegation is worse than a comedy of errors to say the least.

The allegations against the critics of this government will get the legendary satirical writer, Eric Blair a.k.a George Orwell laughing in his grave as he never envisaged a nation of comedians like ours.

We have no choice but to give the benefit of the doubt to the anti graft agency to do their job since he is already in their custody and spent the festive season under their close watch.

We call on the Magu led body to be fair and not get needlessly vindictive as that is the least we need as we have started a fresh year. The Buhari government should also respect court orders in his case as the administration is notorious for disobeying them especially when critics are involved. The President claimed to be a reformed democrat in 2015 while he was campaigning; it is high time he lived up to that tag.

We wish the former pro-masses senator well as we will be glad if his name can be cleared as it will be a monumental tragedy for a mere $10,000 to soil his reputation built sturdily over the decades.

This New Year promises to be an interesting one and we await with bated breath the outcome of the EFCC investigation.

How Biafra can be Peacefully Resolved By Nigeria

Chief Femi Fani-Kayode To South Africans: "The truth is that you are a wicked, cruel, heartless, ungrateful and murderous lot".