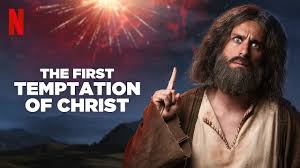 I have been getting emails and Whatsapp messages by some Christian friends to sign up a petition to pile pressure on giant streaming service, Netflix to pull out the movie ‘The First Temptation of Christ’ which depict Jesus Christ as gay. I was born a Christian but at the moment I am not a practicing one as I haven’t been to church for a long time now due to some disillusionment I had with all forms of organized religion including Christianity and so didn’t bother to sign the petition as it keep piling up in my inbox.

While on a visit to the United Kingdom seven years ago, I became aware of the power of the gay lobby and their determination to spread their ideals all over the globe. The 2012 London Mayoralty election between the current Prime Minister Boris Johnson who was then gunning for a second term and Ken Livingstone who was earlier defeated by him saw both men try to outdo each other on promising a better life for the gay community. The Transport for London Buses had a bold inscription ‘Some are born gay, just get over it’ with both men promising not to bow to the pressure of evangelical Christians to get them out.

Many Christians in the now rainbow country were complaining that the miniscule but powerful gay lobby were determined to re-write history in their ruthless determination to spread their values all over the planet. Films were targeted as well as cartoons where gay characters were inserted to buttress their point and drive home their message.

We also recall that during this period Obama and Cameron said they would withdraw foreign aid if hitherto Sovereign African nations rejected the gay agenda which the latter claimed negated the culture and values of Africa.

I can recall always been sent emails to boycott this company or that organization who the Christians claimed were supportive of the ‘sinister’ gay lobby.

I am looking at the ‘First Temptations of Christ’ from a humanist perspective rather than as a nominal Christian which I proudly am. All through the centuries, Christianity tragically has been intolerant of other religions and has condemned them as heretics. We recall the witches of the Middle Ages being routinely burnt at the stake for practicing witchcraft which was antithetical to societal growth and development. The European missionaries to Africa carried on with this same mindset as they condemned the African traditional religion as evil and aroused the natives to burn their idols and abandon the religion of their ancestors for the worship of the ‘true’ God.

Many young Christians are taught from a very early age that what is African is black and bad and what is foreign is white and good. The concept of Godliness is depicted with the existence of a white god who will condemn to eternal perdition all worshippers of gods other than him as his fury will have no ounce of mercy.

Many Nigerian movies show that the cause of the problems of most Nigerians or Africans can be traced to their villages where their ancestors served a god and they need to break the chains of such servitude to be free. There are regular cases of shrines being burnt and idols being destroyed in the mission of the pastors to spread the light of Christ which is the only way by which man can be saved. Some fanatics opine that all other religions other than Christians is a sure way to eternal damnation and it is their duty and responsibility to ensure the conversion of all souls while they still had the breath of life before death would make it too late.

Another card which the Christians play is that they are not violent and would turn the other cheek when slapped. They always say that it is the Muslims who usually get violent when an unsavoury portrayal is made of their religion. They always play the victim card that it’s because of their peaceful nature that they get often bashed by liberal apologists. They boldly recall the cases of Isioma Daniel who had a Fatwa declared on her simply because she wrote a provocative article about the Holy Prophet during the Miss world contest of the year 2000; they also talk about Sir Ahmed Salman Rushdie whose 1988 ‘The Satanic Verses’ led to a fatwa being declared on him for well over two decades amongst many other cases of intolerance they level against the Muslims.

Let it be clearly known that I believe the Christians have every right to protest against the portrayal of their Saviour as gay; I am still a Christian despite my suspension of my active practice and I also feel greatly offended but the records must be set straight that the Christians must also address their intolerance of other religions which they classify as heathen. I believe in the theory of live and let’s live and would love Christians to take a deep introspection at practices which make them standoffish and condescending of other religions.

In a world which has been badly brutalized by wars largely on religious grounds, it will be good for Christians to be more tolerant of other faiths so that the beautiful concept of diversity and inclusiveness which is a precursor to the much needed world peace can be best lived.

Question Buhari & Osinbajo Must Answer: Who Is The Substantive Chief Justice Of Nigeria?

As Nigeria is a Failed State, Buhari is projected to be re-elected

The Slaves Of Nigeria