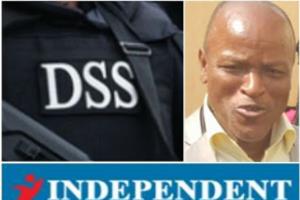 By Committee to Protect Journalists

New York, March 6, 2018–The Committee to Protect Journalists welcomed the release today of Tony Ezimakor, Abuja bureau chief of the privately owned Daily Independent newspaper, who was held by Nigeria’s Department of State Services (DSS) since February 28. Ezimakor was released unconditionally from DSS custody in Abuja around 10:30 p.m. local time, according to Sahara Reporters, a New York-based news website.

“Nigeria’s intelligence agency, the DSS, should never have detained Tony Ezimakor or tried to force him to reveal his sources,” said Angela Quintal, CPJ’s Africa program coordinator. “Authorities must now also release Nigerian journalist Jones Abiri , who has been in DSS custody since July 21, 2016.”

Abiri, the publisher of the Weekly Source tabloid newspaper, was arrested in Nigeria’s oil-rich southern state of Bayelsa and accused of being the leader of a separatist group. No charges against him have been disclosed , and his family and lawyer have been unable to see or speak with him.