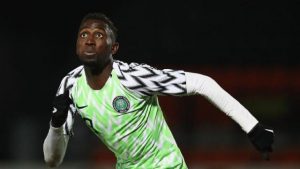 Francis Uzoho will continue in goal and Wilfred Ndidi will make a return for the Super Eagles in Wednesday’s international friendly against the Czech Republic in Vienna, Austria.

Nigeria coach Gernot Rohr is expected to make several changes to his lineup after a shambolic first half display in Saturday night’s 2-1 loss to England at Wembley.

Expected to miss out on the starting lineup are Ogenyi Onazi and Joel Obi, with Ndidi and John Ogu taking their places.

Uzoho, who came on for the second half of the 4-2 friendly win over Argentina earlier this year, has been in goal in each of the four games after that, and is poised to continue in goal against the Czech Republic.

“Uzoho will start in goal (against Czech Republic),” Rohr told KweséESPN on Tuesday.

“Ndidi will start. We followed very well the protocol by Leicester and he is now ready to play.”

“We will go for victory that would boost spirit and earn team confidence ahead of our first match in Russia. It would not be an easy pick but we will work hard for it,” Rohr added.

Wednesday’s encounter takes place at the Rudolf Tonn Stadium – a multi-use facility in Rannersdorf, a city in the sub-division of Schwechat, outside Vienna – and is scheduled to kickoff at 2PM Nigeria time

Mbappe Is The Most Valuable Player In The World

9 thoughts on “Uzoho, Ndidi to start for Nigeria against Czech Republic”