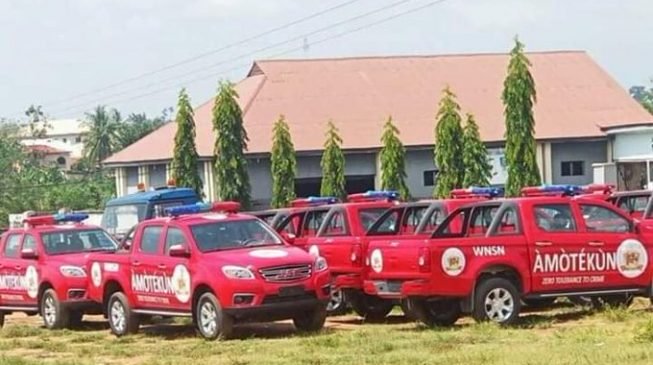 First they came for the Socialists, and I did not speak out,because I was not a Socialist.

Then they came for the Jews, and I did not speak out, because I was not a Jew.

Then they came for me,and there was no one left to speak for me.- Martin Niemöller

On the 7th January, 2020 the governors of the South West, announced the establishment and take off Operation Amotekun, a regional security force aimed at complementing the efforts of the Nigeria Police and the army in the region. The governors’ at the declaration, emphatically made it clear that the outfit was not a replacement for the other security agencies but a support for the existing paraphernalia and alternative means ensuring the security of lives and property of the people of the region.

Governor Kayode Fayemi explained this creation thus; “Amotekun is a complement that will give our people confidence that they are being looked after by those they elected into office. So, we do not want this to create fear in the mind of anybody, as we are not creating a regional police force, and are fully aware of the steps we must take to have the state police. We do not want anybody to misconstrue the concept of Amotekun.

It was in the context of the unfortunate development that we lost the daughter of Pa Rueben Fasanranti, the leader of Afenifere. And that further put pressure on us, as leaders in the Southwest, to do something about insecurity. As elected leaders, our primary responsibility, according to Section 14 (2) of the Nigerian Constitution 1999 as amended, is the security and welfare of citizens.

That was what informed the governors coming together to fashion out a way to complement the work of the mainstream security agencies overstretched in their efforts to arrest the menace that have afflicted the entire country.” (see : https://tribuneonlineng.com/the-real-significance-of-amotekun ).

Unfortunately the Federal government had a dissimilar view of the matter; declaring the setting up of the paramilitary organisation illegal and contrary to the provisions of the Nigerian law.

According to the Attorney General of the Federation, Justice Abubakar Malami, the establishment of the security outfit is in contravention of the law even as the Constitution of the Federal Republic of Nigeria 1999 (as amended) has established the Army, Navy and Air Force, including the Police and other numerous paramilitary organisations for the purpose of the defence of Nigeria.

According to him, …no state government, whether singly or in a group has the legal right and competence to establish any form of organisation or agency for the defence of Nigeria or any of its constituent parts.

“This is sanctioned by the provision of Item 45 of the Second Schedule of the Constitution of the Federal Republic of Nigeria (as amended) authorizing the Police and other federal security services established by law to maintain law and order.

“The law will take its natural course in relation to excesses associated with organisation, administration and participation in Amotekun or continuous association with it as an association.

“Finally, it is important to put on record that the Office of the Attorney-General and Minister of Justice was not consulted on the matter. If it had, proper information and guidance would have been offered to ensure that Nigeria’s defence and corporate entity are preserved at all times.”

As explicit and logical as the explanation may sound, the establishment of Amotekun is not the first of its kind in the country’s history even as it is not the first to receive open condemnation from the federal government whose inability to guarantee safety of lives and property has necessitated such establishment.

It is common knowledge that the establishment of regional security agencies is not new to the Nigerian security architecture even as the nomenclature may vary. In the far north exists the dreaded Hisbah Commission, created by state legislation and has duely taking the place of the Nigeria Police.

The State Hisbah Corps was established by the state government in 2003 with the institutionalization of formerly local and privately maintained hisbah security units. Hisbah, which is an Arabic word meaning an act performed for the good of the society, is an Islamic religious concept that calls for “enjoining what is right and forbidding what is wrong on every Muslim.

The Hisbah Corps, which operates under the jurisdiction of a Hisbah Board composed of government officials, secular police officers, and religious leaders, is highly decentralized with local units supervised by committees composed of officials and citizens in the communities in which they operate.

The Hisbah which was created from a religious watch group is the official enforcers of the Sharia law to muslims and non-muslims residing in the north especially Zamfara and Kano states.

This pseudo-security outfit has proven to operate at par with the state security paraphernalia as it even has dared to arrest and parade a serving policemen in Zamfara for having consensual sex at a hotel in Gusau, an act they termed social vice. The police officer, who is serving with the Central Police Station, Gusau, was arrested with the three girls in a room at the hotel, allegedly committing acts contrary to Sharia law.

Unfortunately this is not the first time the federal government has not hidden its bias in administration of justice and ensuring security.

Only recently had the press through the prompting of certain statements from high ranking state characters (representing the federal government), vilified the Benue State governor, Dr. Samuel Ortom and his government for attempting to ensure the enforcement of the state law prohibiting open grazing; a cankerworm that had caused plenty pain and grief to the people of the state.

The state open-grazing prohibition law was necessitated by the lackluster the federal government had exhibited towards the carnage meted on innocent Benue farmers by marauding Fulani farmers with intent to take over farmlands.

The law seeks to ensure best grazing practice of restricting movement of livestock and ensuring minimal clashes between both livestock and crop farmers.

In order to ensure this law was adhered to, the federal government set up a corps, called the state Livestock guards whose sole responsibility was to ensure the state law prohibiting open grazing was respected. The corps was not aimed at any religion or sect like the Hisbah but was aimed at ensuring a law which guarantees for best farming practices takes root. Alas! The federal government in her unrepentant bias took rams against the state and like the unfortunate Amotekun, was vilified and even termed a militia!

Ortom was on the lips of every acclaimed federal government commentator, Benue state was demonized by every interested bias pundit for daring to defend his people; the leaders of the South West stood quiet or even dared to join the furrow and unfortunately for them like Martin Neimoller’s post war words “ First They Came… they have come for the South West.

However the question is, Do we stand and watch this selective justice stay?

The Innoson Affair, The Igbo And The Orphans Of The Corporate World

Economic Salvation Is In Your Pockets Not In Foreign Land