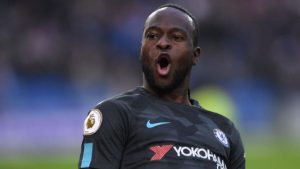 Victor Moses joined up with the Nigeria squad on Thursday after taking some time off to celebrate a second honeymoon following his FA Cup final win with Chelsea.

The forward arrived at the team’s Wembley Hilton hotel hours before the rest of the squad touched down from Nigeria.

Super Eagles coach Gernot Rohr told KweséESPN that Moses had asked for an extended break to spend time with his wife.

“After the FA Cup Final, he told me it was the first anniversary of his wedding and if I could give him two days to celebrate,” the German coach began. “I said no problem.”

Moses joins the rest of the team for their first training session in England on Thursday at The Hive, home of Barnet.

The Super Eagles play England on June 2 at Wembley, having been held 1-1 by the Democratic Republic of Congo in Port Harcourt on home soil in their World Cup send-off.

Rohr has already cut Stephen Eze, Junior Lokosa, Dele Ajiboye and Henry Uche Agbo from his squad, while Moses Simon appears primed to miss out after picking up a hip injury.

The 64-year-old will still need to axe two more players before confirming his final list for the summer showpiece.

They conclude their group-stage programme against old foe Argentina in Saint Petersburg on June 26.

In signing Lucas Torreira, Arsenal has done something it hasn't done in over 15 Years