Victor Moses ruled out of Chelsea’s clash against Vidi

Victor Moses ruled out of Chelsea’s clash against Vidi 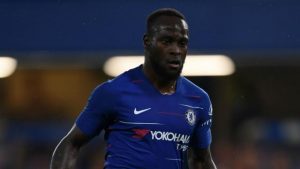 The 28-year-old is yet to recover from a back injury he suffered in November and will miss his team’s last Group L tie in Hungary.

Moses has found game time limited under Sarri this season with just five appearances across all competitions this season.

He has made two substitute appearances in the second-tier of the European club competitions so far in this campaign –  a situation that made him ponder over leaving Stamford Bridge in January .

“I don’t know the starting XI. I decided the players who played three matches in six days in the last week had to rest for this match: Kepa, Rudiger, Azpilicueta, Kante and Hazard,” Sarri told club website.

“Then we have three injuries: Kovacic, Cahill and Moses. All the other players are here.”

Chelsea have already booked their spot in the knockout round of the competition as Group L leaders with 15 points from five matches.

Nipperess walks out of hospital

Moses: ‘It was pretty terrible’