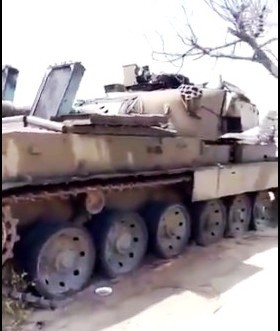 One of the anonymous soldiers, in a video recording he captured, stated that scores of his colleagues were killed by the terrorists recently.

In the footage, which emerged online on Monday and believed to have been captured in a part of Borno State, some soldiers were seen at the background while the voice behind the camera walked round an area.

Damaged weapons, vehicles, tyres, tanks among others were visible in the video.

Speaking, the soldier, who accused President Buhari of not doing his job, alleged that Buratai and the Nigerian Army Generals were corrupt.

He said: “These people (Boko Haram) are killing us. Nigerian Army…no weapon, nothing. See the weapon they brought here, these ones are not working. These are outdated vehicles, they are not working.

“They just kept them here for formality…just to discourage us in the name of encouragement. They are not giving us anything. Imagine, a soldier is in the war front, no helmets, no jackets. No enough ammunition to help himself in this situation.

“We are not going to take this again. It is enough. Enough is enough. Yes, we die, they kill us but we are fighting to defend our country.

“The Generals are cheating us. It is time for the Generals to stop all these things, Nigeria will hear this. This situation is getting worse, these people are not helping us.

“Mr President it’s like you’re not doing your work. What is the meaning of this? We are crying, we are dying. Our families are there, at the end of the day, they will not get or gain anything. What is the use of the job?

“And they are there calling themselves Generals, they are eating money.

At this point a soldier joins the protest, while the recorder continues: “30 people died here (earlier) and no less than 100 soldiers died in the last attack. Many missing in action, nowhere to be found.

“Government, Buratai you are cheating us, you are killing us. We are not going to take it, it’s enough”, he fumed.

The Nigerian Army is yet to react to the video.
Watch video below:

BOMBSHELL: WATCH and SHARE. This is the video that made Borno Governor Shettima WEEP at @AsoRock. @MBuhari LIED that he had reclaimed Nigerian Territory from Boko Haram and equipped the army. Here is the proof. WATCH, COMMENT and RETWEET #RenosDarts pic.twitter.com/8EaTZw1ifY