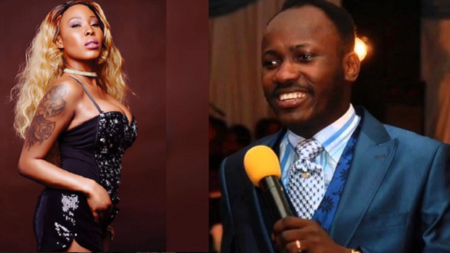 It was Nigeriaa��s biggest sex scandal last year. A Canada-based woman stormed the Nigerian most populous city of Lagos and alleged that shea��s been having sex with a mega star pastor.

She said she was suing him for a�?breach of contracta�?. The story went viral, especially as she gave shocking details of how the sex encounters went. She claimed that they sometimes had video sex and she recorded him with his hand on his penis.

Sarcastically, she added that the police should compare that hand with his real hand and see if there was any difference.

It was the perfect sex scandal story. A rising pastor who was criticizing government officials for the killing of Christians in the northern Nigerian state of Kaduna, embroiled in a sexual encounter with a Canada-based a�?actressa�� or a�?singera��.

The pastor denied it and called her a cheap prostitute sent to blackmail him.

But in a dramatic turn of events, Stephanie Otobo went to his church and apologized.

She said she lied against him to make money after she fell into strong hands from some politicians.

Watch what she said before at a press conference organized by her lawyer Festus Keyamo when she accused the pastor to have had a sexual relationship with her.

watch what Stephanie said when she visited the church and apologized recently.

Nigeria will do 'whatever it takes' to shield country from $9 bln claim: FG

Yes, Ita��s A Fight To The Finish! Bola Tinubu To Battle Davidoa��s Dad, Deji Adeleke Over His Younger Brother