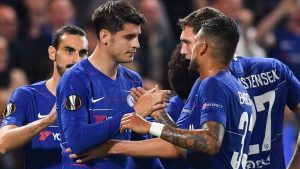 I n a match that will be mostly remembered for the anti-Semitic chanting of Chelsea supporters, Maurizio Sarri’s side earned a creditable 2-2 draw in an oddly fractious Europa League tie away at MOL Vidi.

Chelsea came into the match as group winners so had nothing to play for, while the Hungarian champions Vidi were effectively out by half-time when the news filtered through that their rivals for the runner-up spot Bate Borisov were leading 3-0 away at PAOK Salonika.

But in spite of how little was at stake, Sarri was left enraged on the sidelines as the Vidi players came flying in with a number of hefty challenges in the closing stages.

There was also concern at Alvaro Morata limping off with a knee injury shortly before half-time, though Sarri said afterwards that the first impression of the club doctor was that it was “not serious”.

Going into the match, most of the discussion had centred on how Chelsea’s pair of 18-year-olds Ethan Ampadu and Callum Hudson-Odoi would fare. But for most of the first half, it was Willian, the only survivor from Saturday’s win against Manchester City, who stood out.

Willian looked a cut above everyone on the pitch, and with 30 minutes played duly curled a beautiful free-kick that he had won into the bottom corner. After a soporific first half-hour, the game was suddenly enlivened, and moments later Ampadu headed into his own net from a Vidi corner.

It was an unfortunate mistake for a player who looked classy in possession and clearly has a bright future in front of him.

“The own goal is not the fault of Ampadu,” Sarri said afterwards. “I think he played a very good match.”

The second half was as entertaining as the end of the first, with the impressive Loic Nego hammering a volley beyond Willy Caballero before substitute Olivier Giroud bent a peach of a free-kick into the top corner.

After the match, Sarri singled out Ampadu and the lively Hudson-Odoi for praise. “I am really very happy with Ampadu and Callum Hudson-Odoi,” Sarri said. “Of course they need to improve in every way, tactically and technically, but they are in the right way.”

Chelsea: Willian hugs his way out of transfer rumour STORM