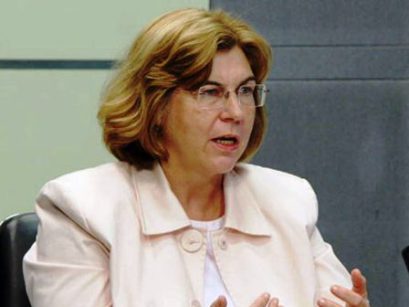 UNITED STATES Consulate public affairs officer in Lagos, Mrs. Darcy Zotter on Monday 25th June, 2018 expressed America’s support and commitment for a peaceful, free, fair and credible election in the 22nd September 2018 governorship election in the state of Osun and most importantly in next year’s general election in the country.

She made the remark at the ‘Freedom Park ground ’ Osogbo in her speech at the one day public voter education sensitization campaign organized by members of United States Government Exchange Alumni Association, Osun state chapter in collaboration with the state Independent Electoral Commission (INEC).

The Alumni association with the commencement of campaign rallies by registered political parties in the state, organized an outdoor sensitization programme to educate the public, essentially voters on the need for a peaceful, free, fair and credible election in the state.

Mrs. Zotter reminds the people that a violence-free election in Osun state and in any state the country this year and in 2019, will enhance a united, stable and economically prosperous country and will in addition increase the mutual bilateral relations between Nigeria and America.

She commended the efforts and activities of members of the Alumni association in the state for staging such a laudable programme to sensitize the people on voter education. She re-iterated America’s willingness to support and partner with the association in all their efforts for the growth and development of the state and particularly for the success of the forthcoming election in Osun state.

In the world today Mrs. Zotter said, there is no doubt in the fact that only a few committed people like members of the Alumni group can change Osun state, Nigeria and indeed the world. She urged everyone in the audience to always see himself or herself as an agent of change for the growth and development of their community.

“Love your neighbors and see the good in them, because they are the change we need for Nigeria,” she said.

She advised political party agents to work hard, lay good examples and be good agents of change to the people with great emphasis on the fact that they must not only vote, but must also encourage their followers to register and vote in the coming election in the state.

As regards electing a good leader in a democratic election, Mrs. Zotter admonished voters to do the necessary research in this direction and be well educated on who to vote for. She warned electorates not to vote for candidates based on ethnicity, sect, vote buying, family-ties, friendship or any other frivolous issues that will bring about fraud in an election.

She urged voters to first know and note poor governance issues facing their community or the nation (Is it on Education, Electricity, Roads, Health care, Security, etc.). They must secondly in their research result know or identify which of the candidates can meet their need or do the needed work for the growth of their community if elected.

“Please don’t waste your vote on wrong candidates, cast your votes only for candidates who can deliver on pressing issues for community or nation building,” she said.

She thanked the Alumni members for their interest in the future of their state and indeed their nation and promise to look forward with great hope for their success story in the future.

The coordinator of the United States Government Exchange Alumni Association, Osun state chapter, Prince ‘Femi Adefila earlier in his welcome address at the ceremony thanked the United States Consulate in Lagos for their support to the association which enhanced the staging of the event and other training activities of the group in the state.

He said the association owes it a duty to sensitize the general public on their rights and what they are expected to do to choose a leader of their choice. He advised voters to shun hooliganism, exhibit good behavior and manners for the success of the forthcoming Osun state governorship election.

In his view he said, a public campaign like this will inform, educate and entrenched the society with the virtues of democracy, make party leaders and their followers not to see politics or elections as a do or die affairs. He urged stakeholders in the election race to intensify public awareness campaign to educate voters so as to deepen the values and virtues of democracy in them for a hitch free election.

The association he said, started its sensitization campaign programme two months ago with Radio Jingles and Play- lets in English and Yoruba languages, well spoken and understood by the people on the need for citizens of 18 years and above to avail themselves the opportunity for registering at the INEC office nearest to them and collect their Permanent Voter’s Card(PVC) to make them eligible to vote in the coming election in the state. He again strongly warned all citizens to shun violence and since election is not war, must not fight during election.

He admonished the state election umpire (INEC) to make all necessary logistic arrangement and preparation for credible and acceptable election in the state.

The INEC Resident Electoral Commissioner (REC) in the state, who was represented by the Commission’s Administrative officer at the ceremony re-iterated INEC’s commitment for a free, fair and credible election in the state of Osun

He outlined INEC’s readiness and hard work for the success of the 22nd September, 2018 governorship election in the state. INEC, he said is working in partnership with security Agents for a hitch free exercise and has trained enough supervisors and technicians for all the wards in the state. He urged members of the National Union of Road Transport Workers (NURTW) in the state to actively support INEC for prompt and quick transportation of election materials to the wards and polling centers.

He called on all eligible people, particularly youths old enough to vote who have not collected their PVCs to do so immediately, he again urged those who have not registered to quickly go to their local government area offices or visit the INEC office nearest to them to register and collect their PVC.

He however warned voters, party agents and candidates to be well behaved and obey INEC rules and regulations at polling and collation centers, as INEC has put in place appropriate sanctions to punish voters who contravene its rules for a peaceful election in the state.

Many amongst the audience asked questions on election issues not clear to them and after the vote of thanks, Prince Adefila introduced Mrs. Zotter to dignitaries and guests present at the ceremony. She had a press briefing with Journalists and representatives of media organizations within and outside Osogbo who covered the event.